I’ve been lingering with Motherhood, a novel by Canadian writer Sheila Heti. In her book, Heti plays with the question of whether or not to become a mother or a parent. At the same time, a friend of mine shouts to women out on social media to not reduce the ability to carry children. Trans men also give birth, as well as experience abortion. 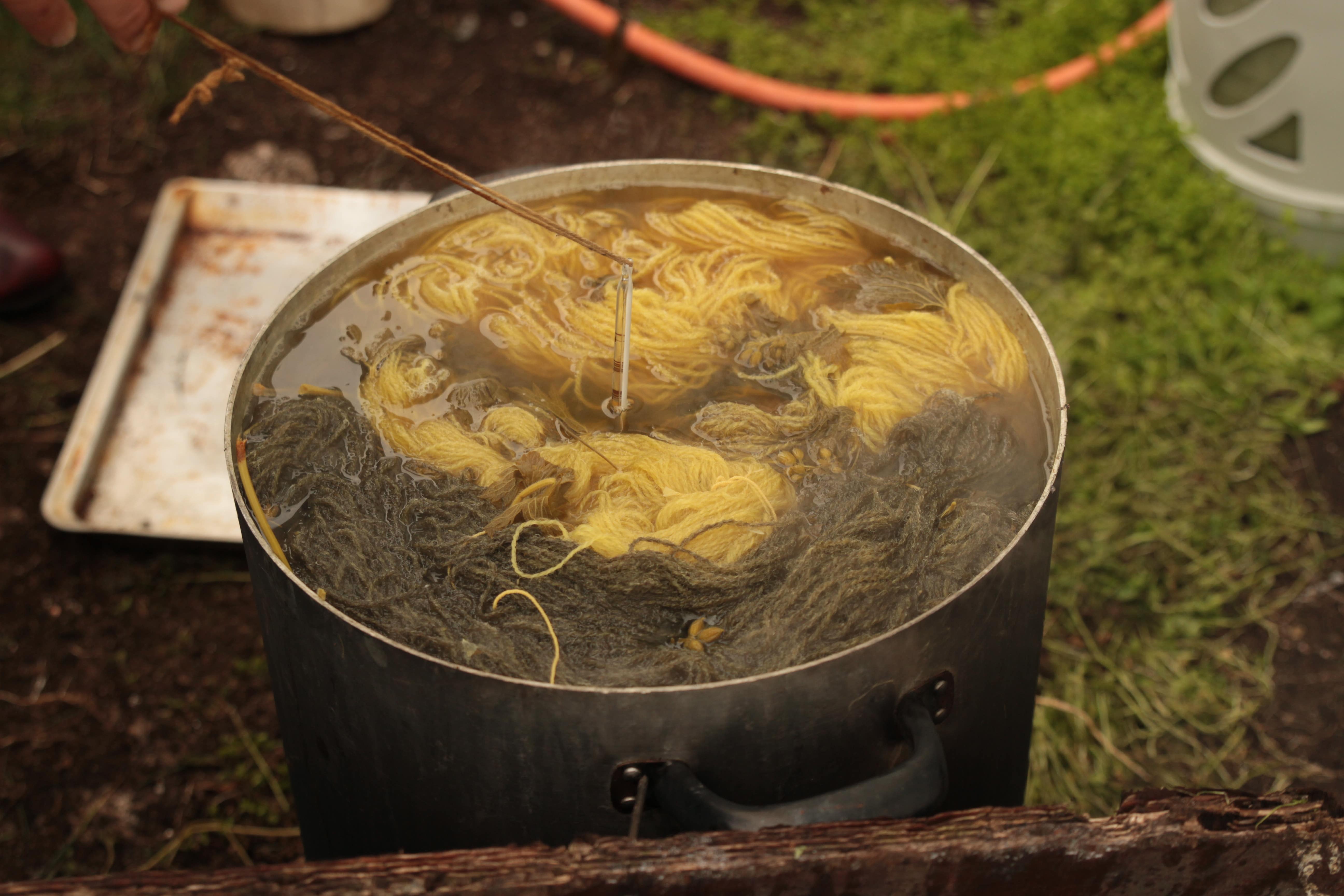 
In episode #17 Unna dig en abort (“Treat Yourself An Abortion”) from the podcast titled “Daddy Issues”, Julia Frändfors and Julia Lyskova ask one another how many angelic children they have. I got one. In the work Arch Angelica birds are nesting their eggs. They are made of what is considered garbage, but sculptural material to me. The birds proportions are close to that of a seagull. A saxophone, an electric guitar, a clarinet, and a melodica form an ensemble. They play out tunes for the lost angels in L.A. I know it doesn’t look like much, but listen carefully, ‘I am trying to think and work towards a non-macho sculpture practice by gathering and assembling small objects in narrative formulations.’

Arch Angelica is a sound sculpture composed of plastic feathers, used food packages, found ropes and metal scrap along the shore of Røst in the southwestern part of Lofoten. It plays out the name of a plant, and a group of people. In the history of plant-based medicine angelica archangelica, commonly known as garden angelica, can induce menstrual periods. Sometimes this can also be used to induce abortions. The plant is dedicated to bodies that are forced to carry life against their will, economic and emotional capacities. Witches were never aesthetic phenomena. They carry the knowledge of the earth and the herbs to get it out of the system, rather than disappear via a pill in a sterile room and down a flushed toilet. When I read Ellinor Lager‘s essay Some Sunsets Don‘t Set I thought about and related to my own body through the void. Norwegian angelica, as this is another name of the plant whose root supports blood circulation, is often confused with the one used for abortion, but you have to ask the witches.

In Christian mythology the angels were gatekeepers between heaven and earth. In Latin the name Angelica can be translated to “angel-like”. In the City of Angels these roots are needed more than ever. Arch Angelica is an electronically amplified ensemble for those who have to cross borders, take a pill in a closet, stick in a needle, or pay a doctor. 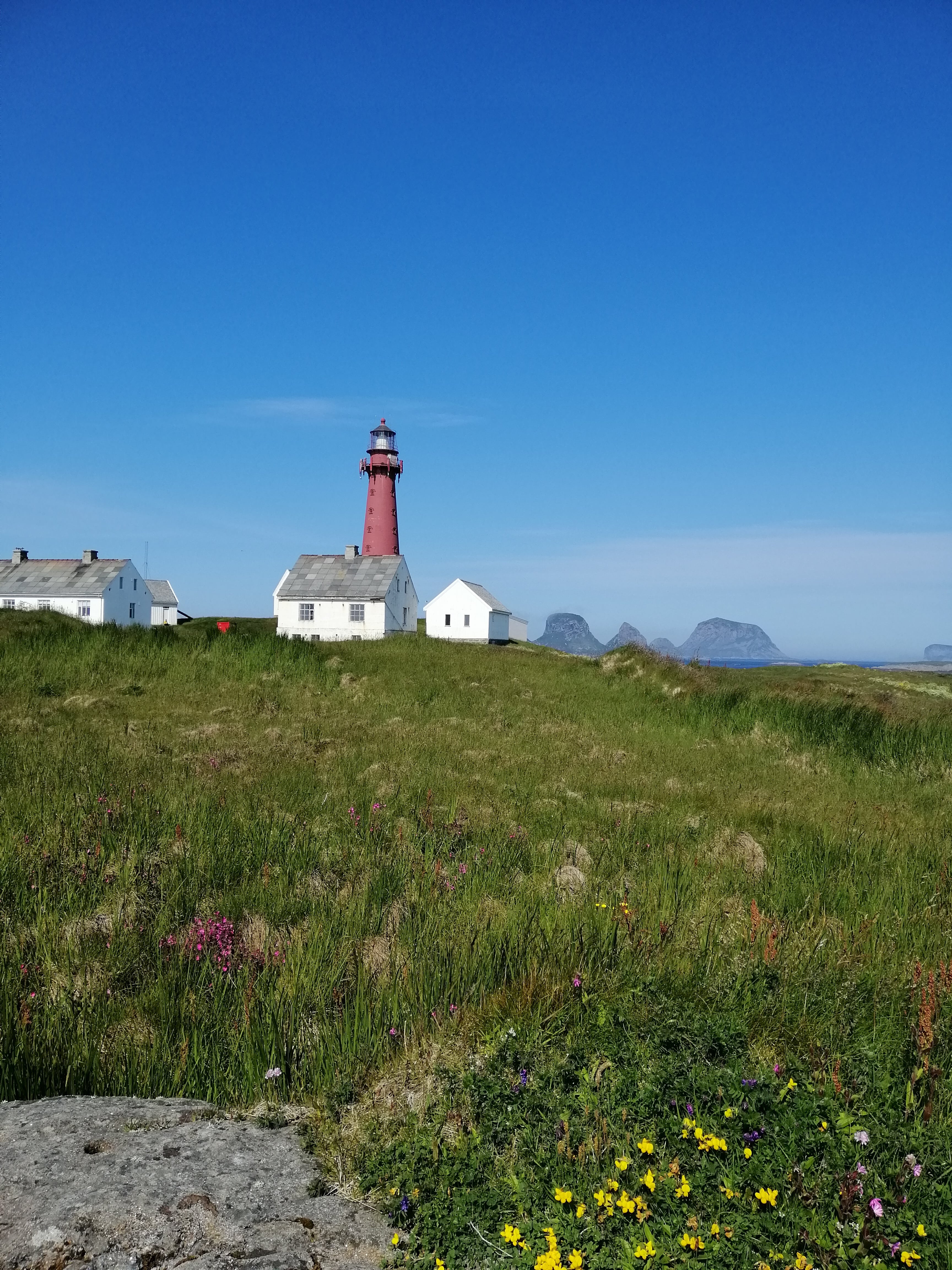 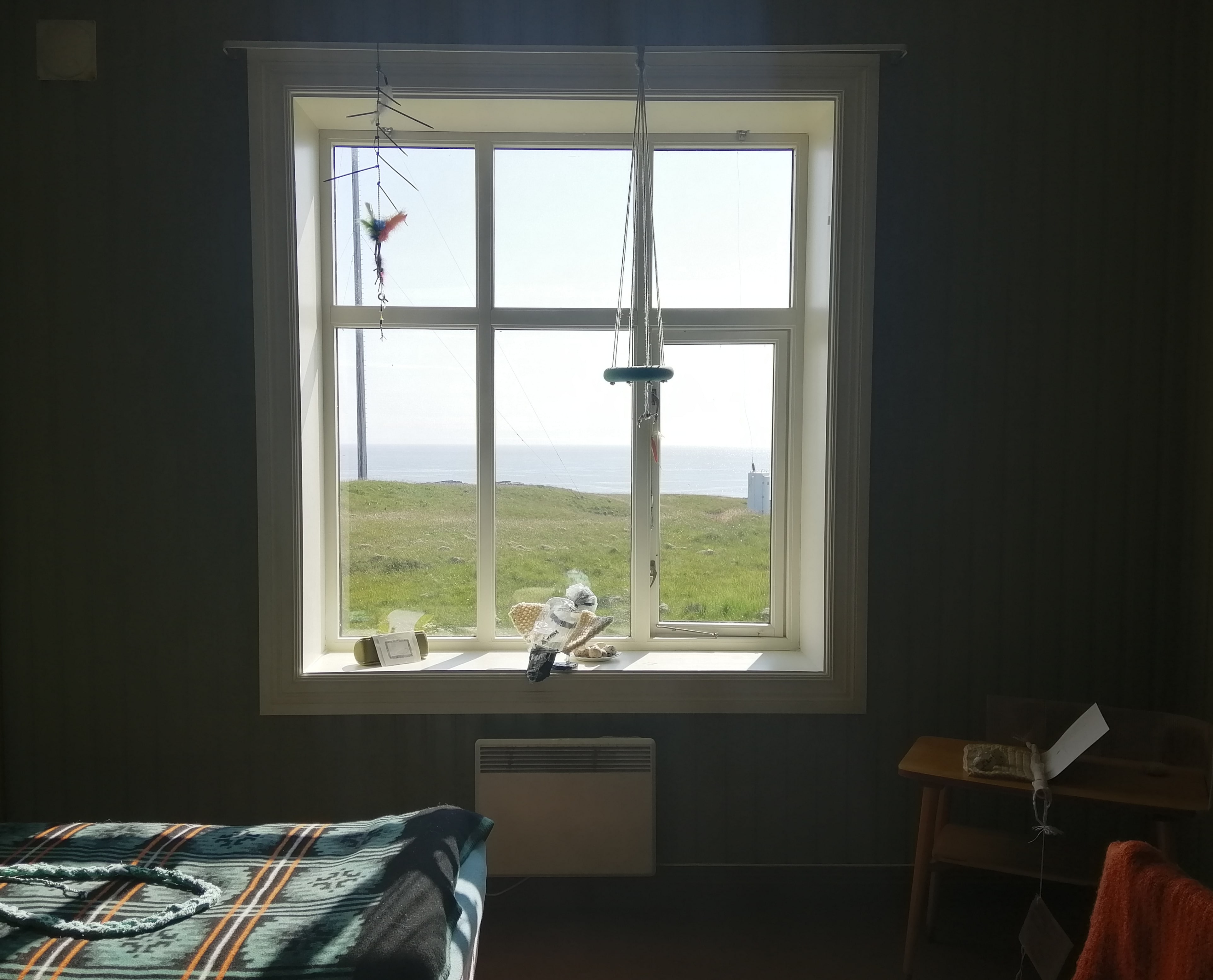 Studio view at Røst AiR, Norway.
Courtesy of the artist. 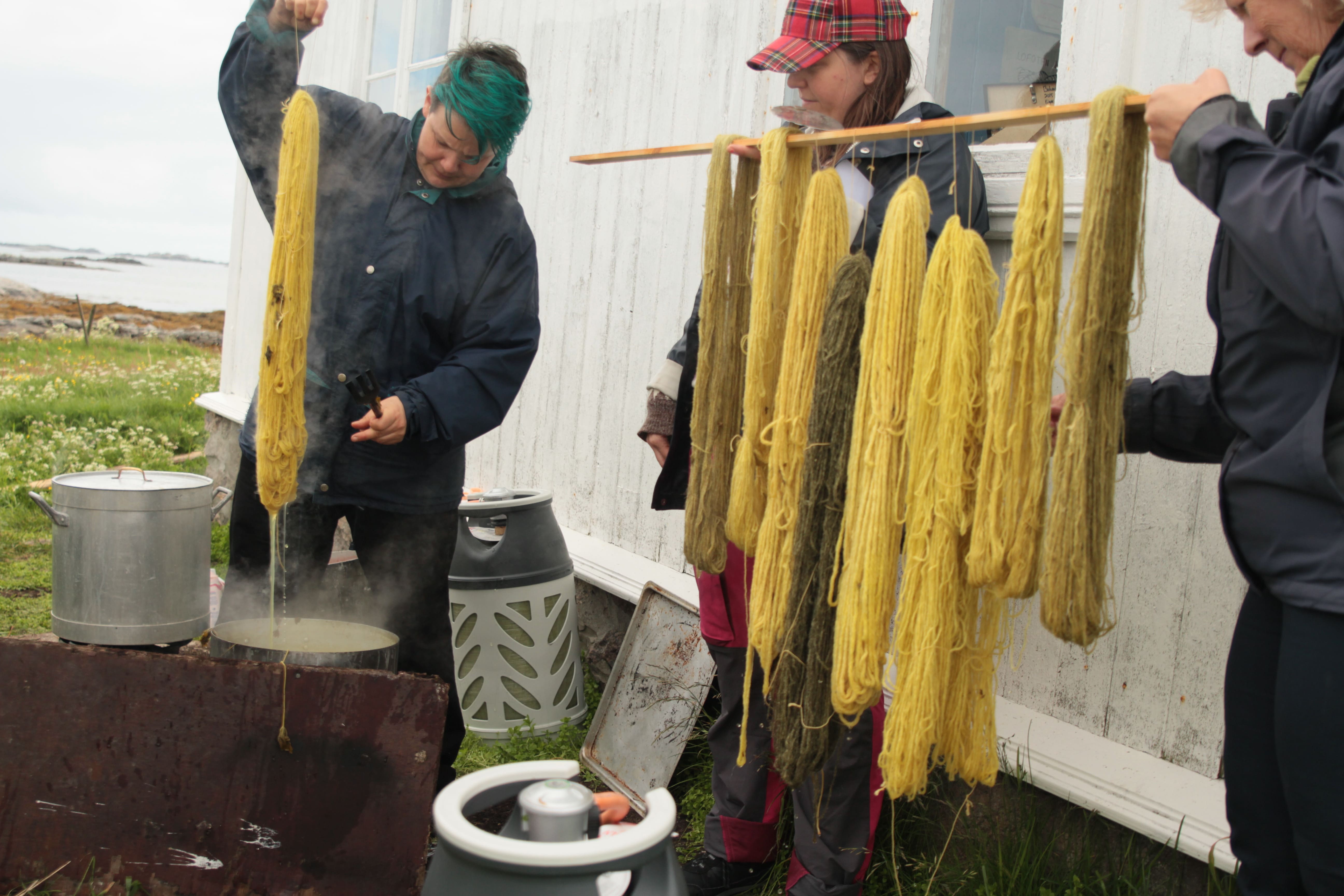 Colouring workshop at Røst AiR.
Courtesy of the artist. 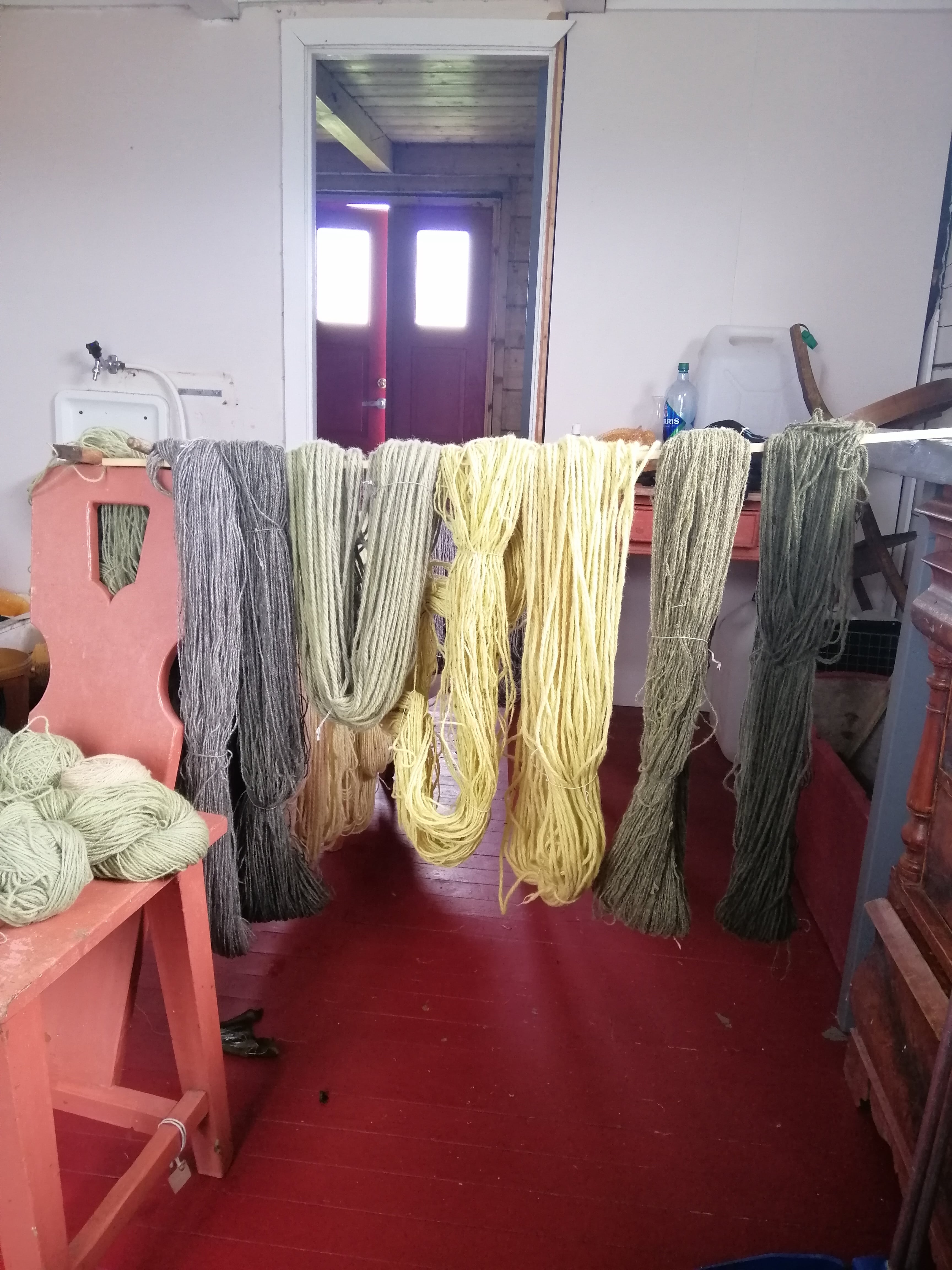 Yarn colouring workshop at Røst AiR.
Courtesy of the artist. 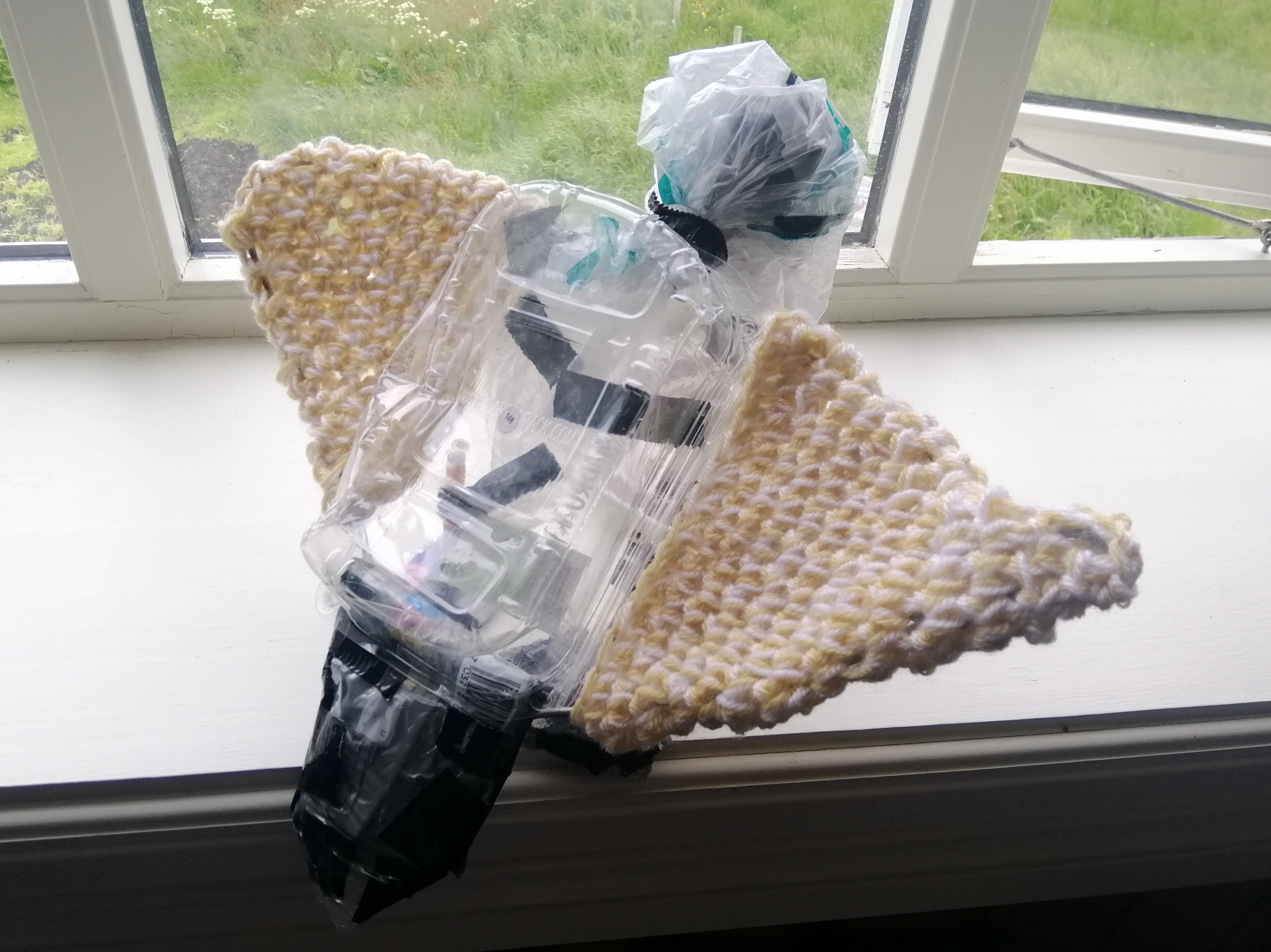 Work in progress, seagull made out of found objects along the seashore at Røst Air.
Courtesy of the artist 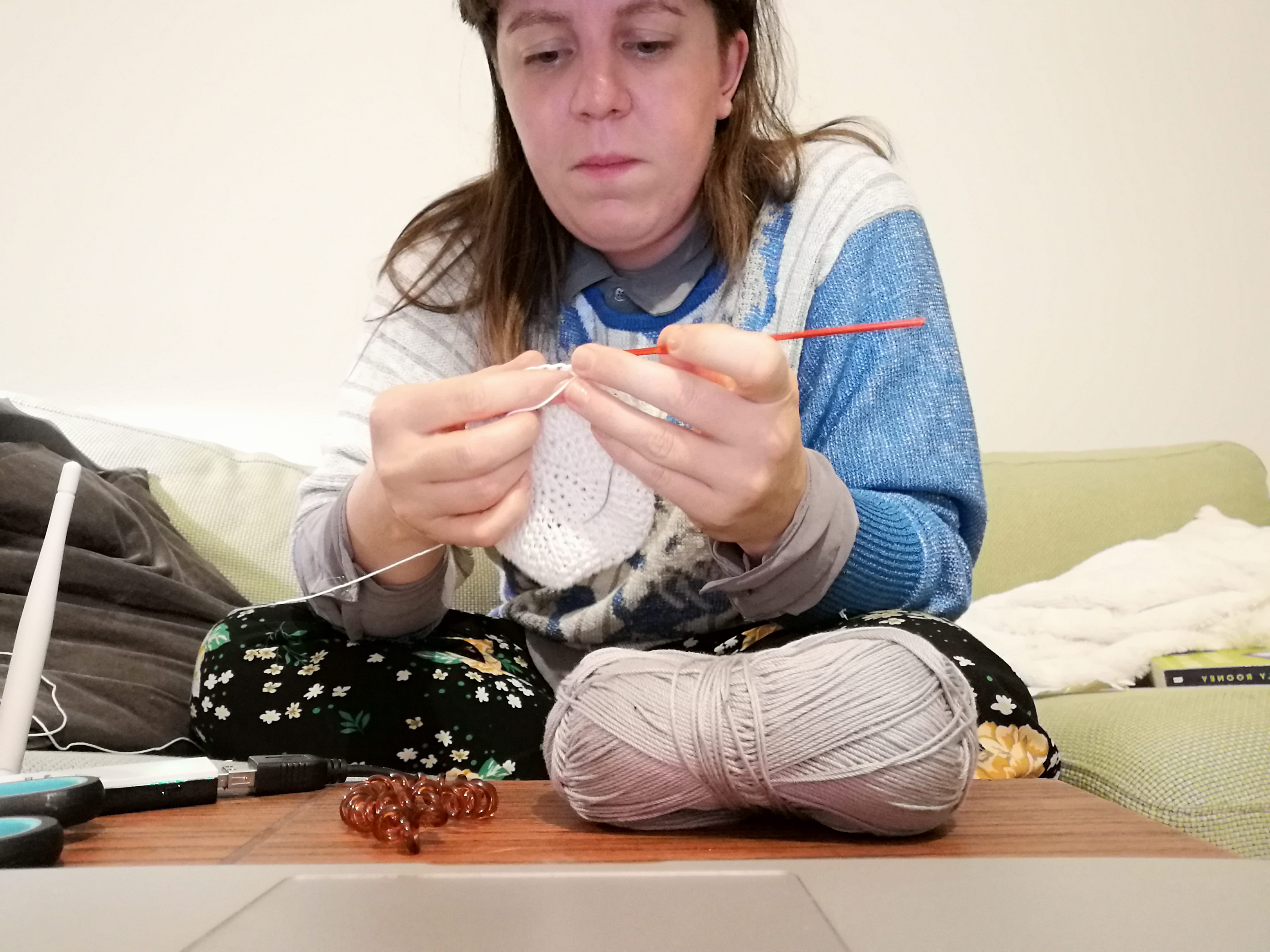 The artist in their house starting to crochet a seagull.
Courtesy of the artist 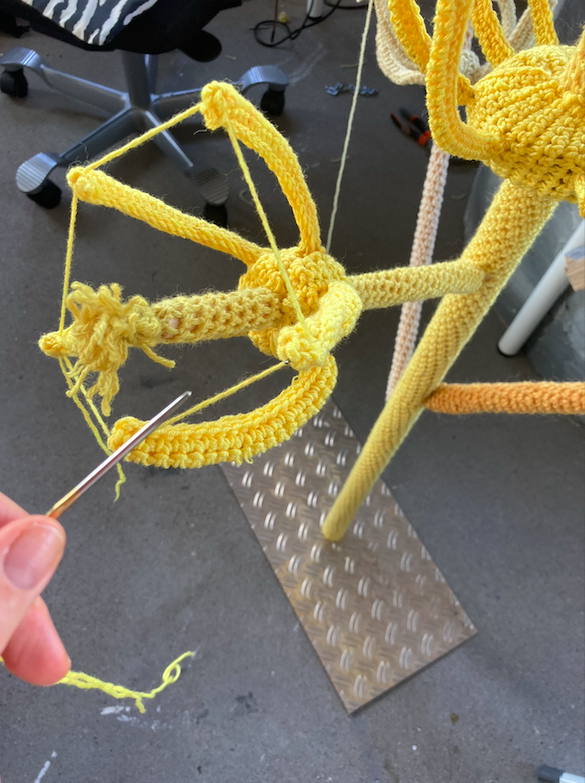 Stabilizing the sculpture Arch Angelica before the transport.
Courtesy of the artist. 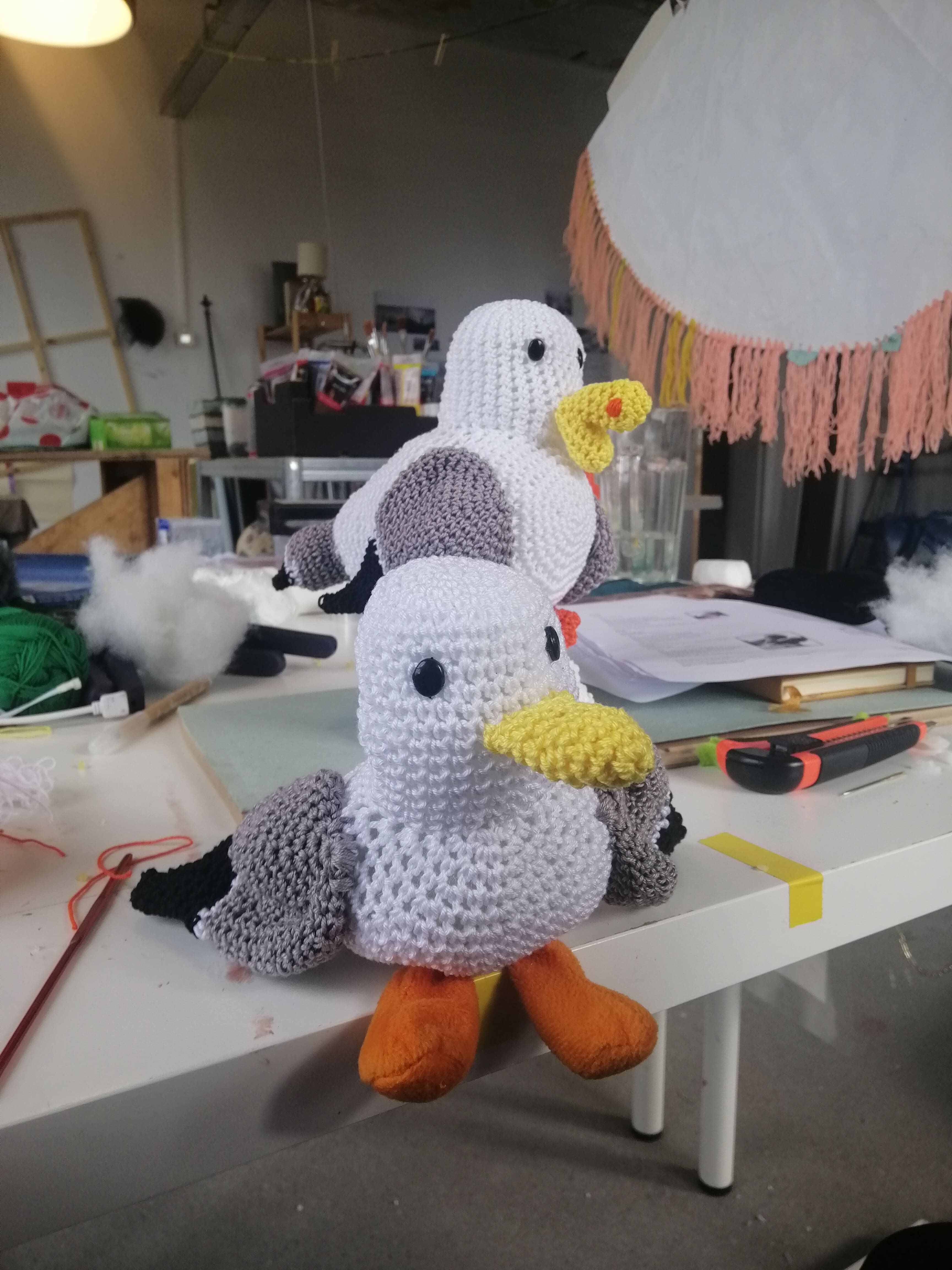 The seagulls in progress in the artist’s studio, Rotterdam.
Courtesy of the artist. 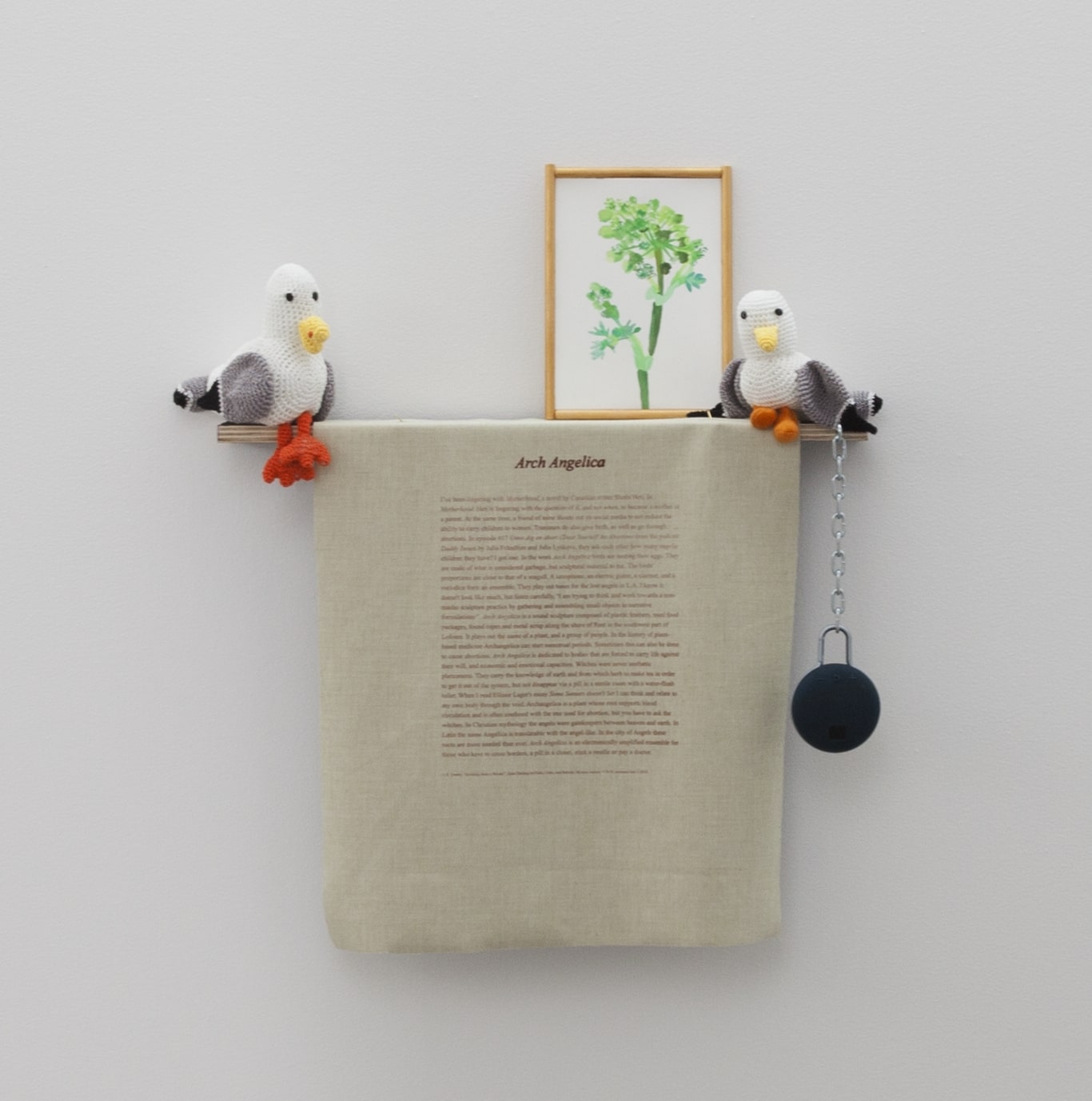 ANGELICA FALKELING (b. 1988, Degerfors, Sweden) works as an artist, seamstress, and costume designer. They depart from textiles and create three dimensional collages in space. Their research focuses on tacit knowledge, garment history, and gender identities beyond binaries. They are part of the artistic duo Emotional Channel alongside Anna Łuczak. They are also one of the founding members of Tender Center, a queer community centre in Rotterdam, which they ran between 2018 and 2020. In 2019, they finalised their first artist commission as part of The Hoodie at Het Nieuwe Instituut, Rotterdam in the form of an audio book and installation telling interwoven stories about cotton and its exploitative labour (modern slavery), and extractive origins in today’s Uzbekistan, published in printed form by Publication Studio Rotterdam, 2020. They participated in a three-chapter exhibition series with Selma Sjöstedt and Sara Lindeborg at Signal — Center for Contemporary Art, Malmö, situated in between the format of solo and group shows was each chapter the sum of a collaborative exploration and the multiple folds that compose an artistic practice. Falkeling are currently a research grant holder by CBK Rotterdam where they explore queer relationship between bodies, and sport through sculptural means. They are also currently collaborating on new works on feminist genealogies with Katarina Zdjelar to be presented at MIMA, Middelsbrough by Autumn 2021. Falkeling served as a jury member for the Drempelprijzen, Willem de Kooning Academy, Erasmus University Rotterdam, and occasionally gave workshops, talks, and mentored art students. They earned a BA in Fine Arts (2014) from Malmö Art Academy and International Academy of Art Palestine, and an MA in Fine Arts (2017) from the Piet Zwart Institute. They received The Swedish Art Grants Committee two-year working grant, 2020 and the Mondriaan Fund (2018). Falkeling were an artist-in-residence at 18th Street Art Center, Los Angeles (2019), Cripta 747, Torino (2018). Their work has recently been part of The Hoodie at Het Nieuwe Instituut in Rotterdam, Emotional Channel at Rib in Rotterdam, OC, a self-organized RV touring exhibition L.A The Car Show: Kraftfahrzeughaftpflichtversicherung in California, USA, A tip’s felt dance at Available & The Rat in Rotterdam, Gift Economy at Pracownia Portretu Gallery in Łódź, Poland, tongue break inhaling at CCA Glasgow, Scotland, and Teaser, Tormentors, and the Infinite Dog at CAC Brétigny in Paris, France. They live and work in Rotterdam.
http://cargocollective.com/angelicafalkeling