HELL IS OTHER PEOPLE.
ON RECENT WORK BY SERGEY SHABOHIN


One of the most interesting contemporary artists from the Belarusian scene, who is currently based between Berlin, Germany and Poznan, Poland, merges different visual artifacts and footages to reflect on the severe, yet mundane reality of his homeland and the presentments or concerns felt throughout today’s Europe. 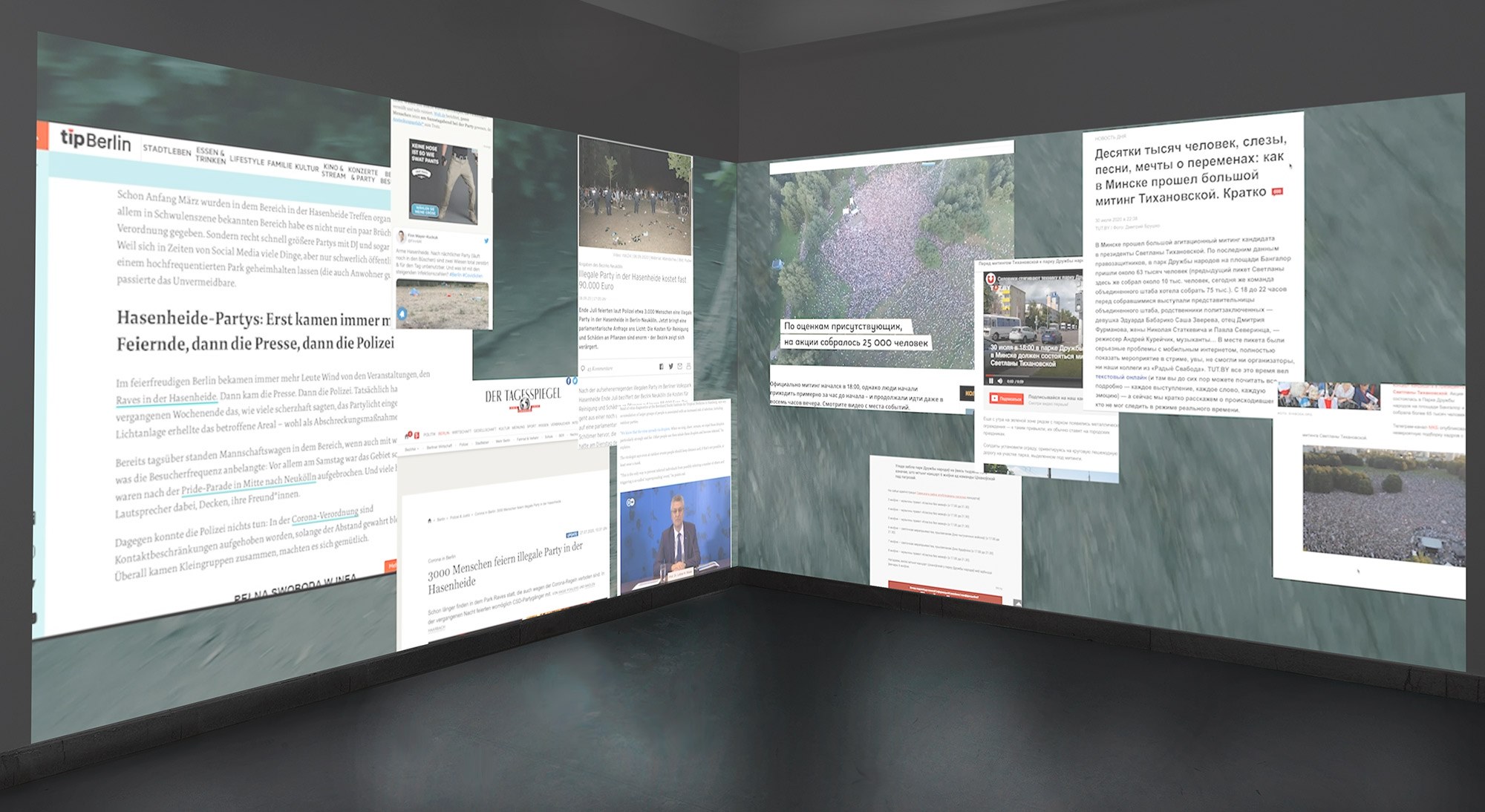 In his latest double-channel video, Mandrake Gardens, Sergey Shabohin draws an intriguing parallel between the two public green spaces during the pandemic. We look at the subsequent images abruptly appearing one after another, either tied closely with the two specific locations — Hasenheide in Berlin and the Park of the Friendship of Peoples (also known as Kievsky Square) in Minsk — or otherwise, quite elusively addressing very remote references. The first has been turned into an open-air ‘club’ with rave music as well as an uplifting locale for Berlin’s cruising scene, and the latter is full of energy amidst the protesting crowds in Minsk. 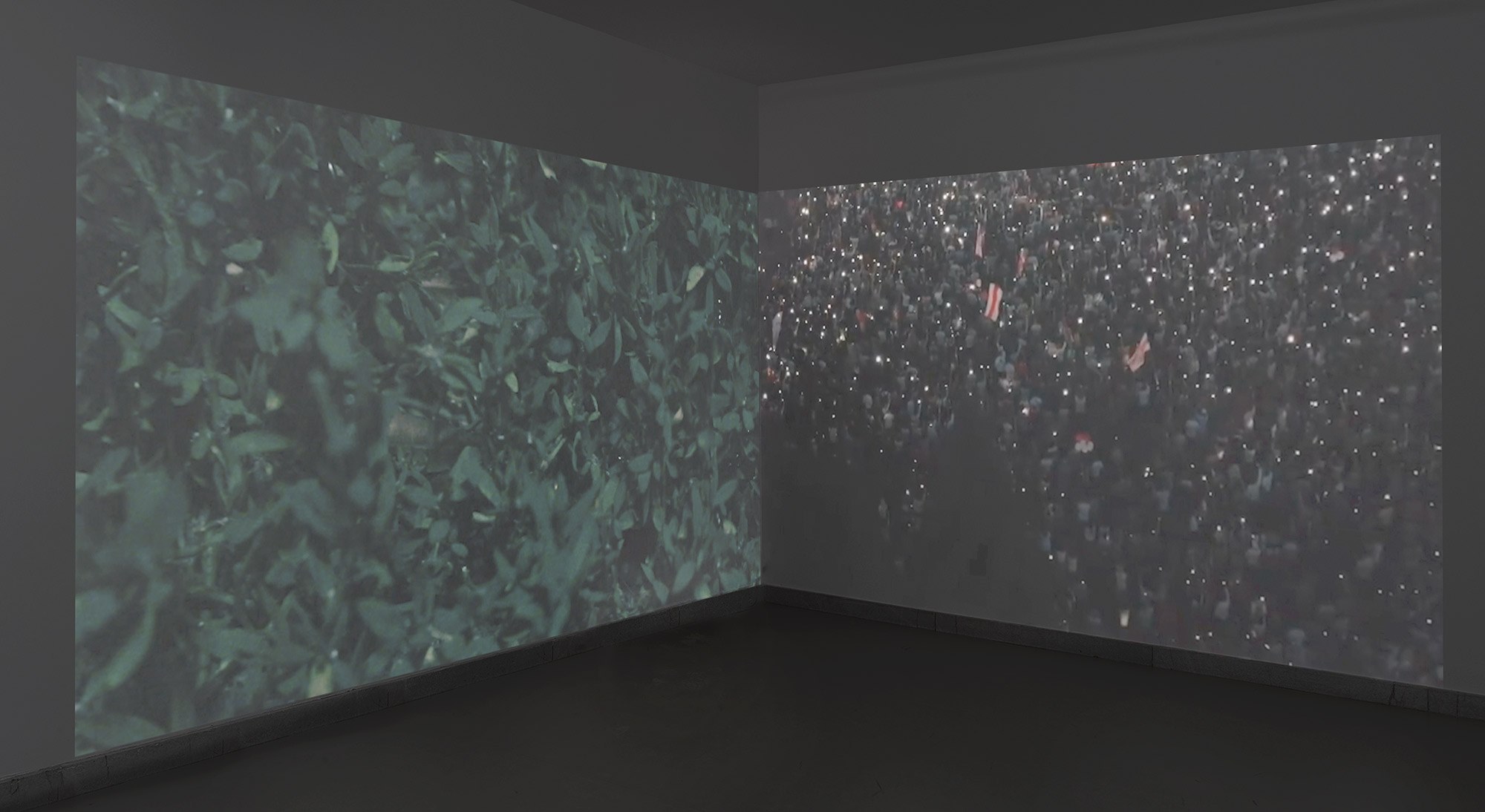 Apparently there is nothing much, to say the least, that connects these two spots. From the other venture point, it is one of the public spaces in Minsk that becomes so telling, to some extent reminiscent to the one in Berlin. An official picket of Svetlana Tikhanovskaya, human rights activist and politician who ran for this year’s Belarusian presidential election as the main opposition candidate — was held in the park on Thursday, July 30, 2020. Despite the fact that the event took place far from the city center, tens of thousands of people attended the rally. On August 6, three days before the elections, it was not possible to repeat the success, as the authorities banned the holding of events in the park, and in the Kievsky park, where they decided to transfer the action, the security forces did not allow a picket to be held.

The current authorities, led by Alexander Lukashenko — the first and only President the country has known since 1994 — have complicated the opposition's campaign in every possible way, arresting candidates and restricting the space for campaigning. In Minsk, campaigning was allowed to be held only in six points, of which the most convenient was one of the parks in Minsk. Ever since the outrage bursted, there is an unknown number of people who have been demonstrating in order to request Lukashenko’s resignation amid the most likely allegations of ballot-rigging.

Мученичество [Martyrdom] is a title of a collage created by the artist out of an archive of images, the representations of full, mostly male body figures and body parts. Shabohin noticed how the injured protesters’ demonstrative postures echoed the tradition of depicting martyrs in icon painting, as if attempting to transpose the unspeakable pain that the peaceful protesters face in Belarus as one collective image of the peaceful protesters being wounded and painfully harmed. The artist collected and painted the background of the photographs with gilding, and the clothes with whitewash, and exhibited the archive in the form of an iconostasis. 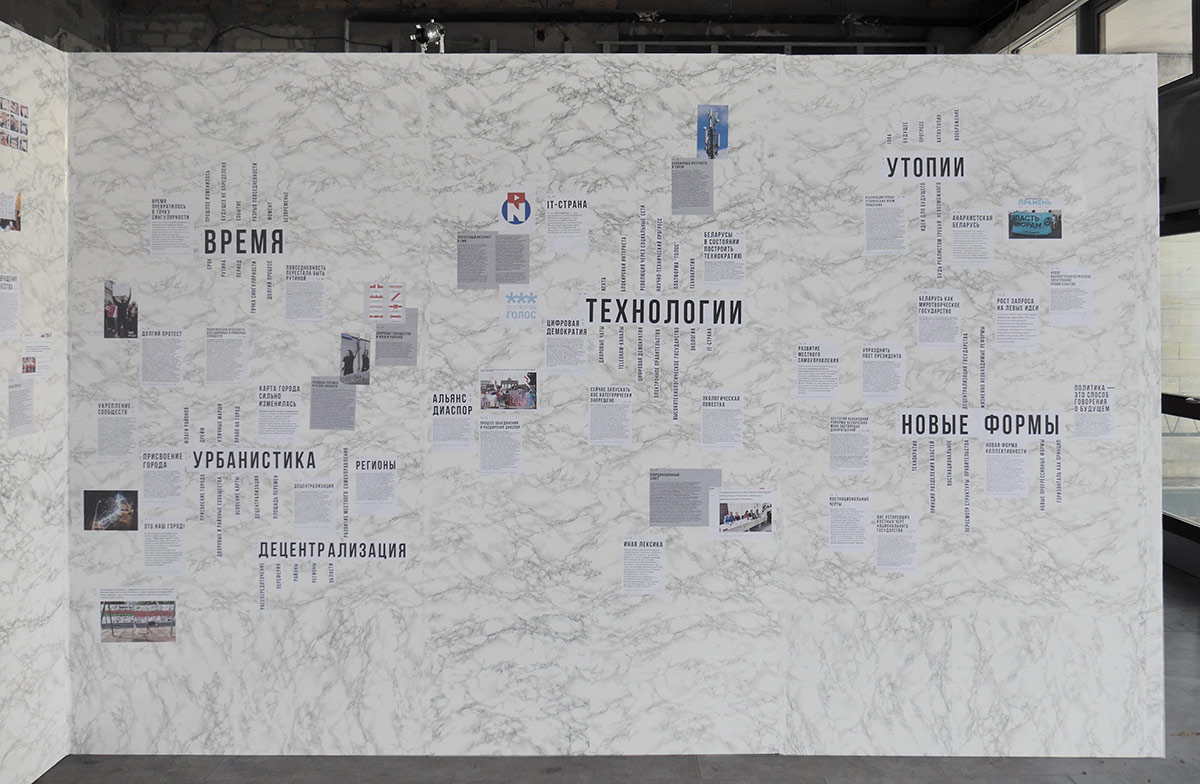 The public space and the specific collective memory seems to lie in the area of the artist’s interests. The monuments in the urban fabric are silent witnesses of the peaceful protests which intensify each day with hundreds of thousands of people from all over the country who regularly express their opposition in the main squares and streets. One of the most recent public projects by Shabohin, Social Marble: The Rise of Civil Society in Belarus, was presented at Berlin’s House der Statistic (November 1 — 20, 2020). The project assumed the form of a collaborative installation of an increasing data created from a dynamic archive formed as a result from a simultaneous exchange he has conducted with a number of contributors. It comprises of a timeline of the rise and development of protest, as well as a glossary of the new civil society. 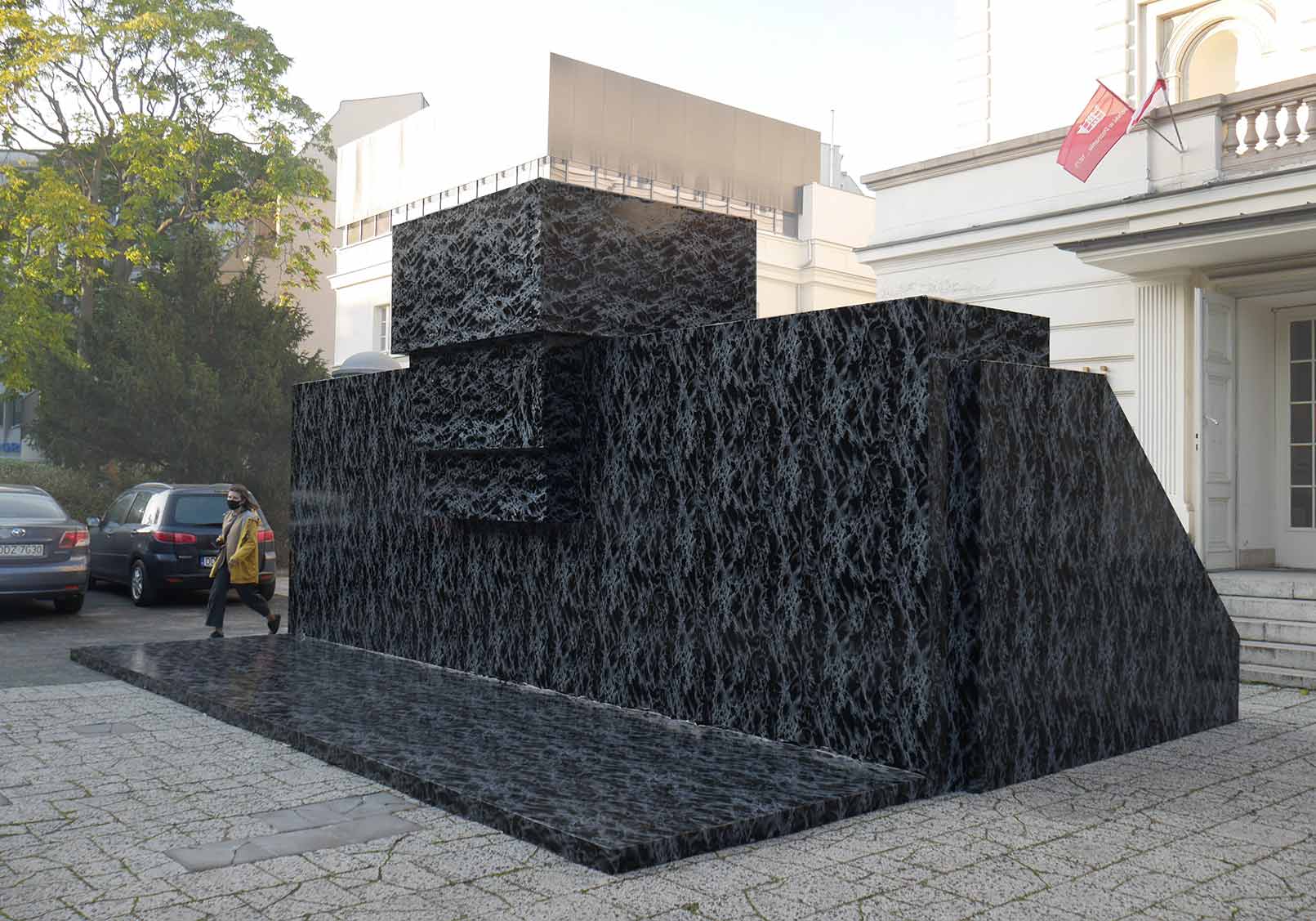 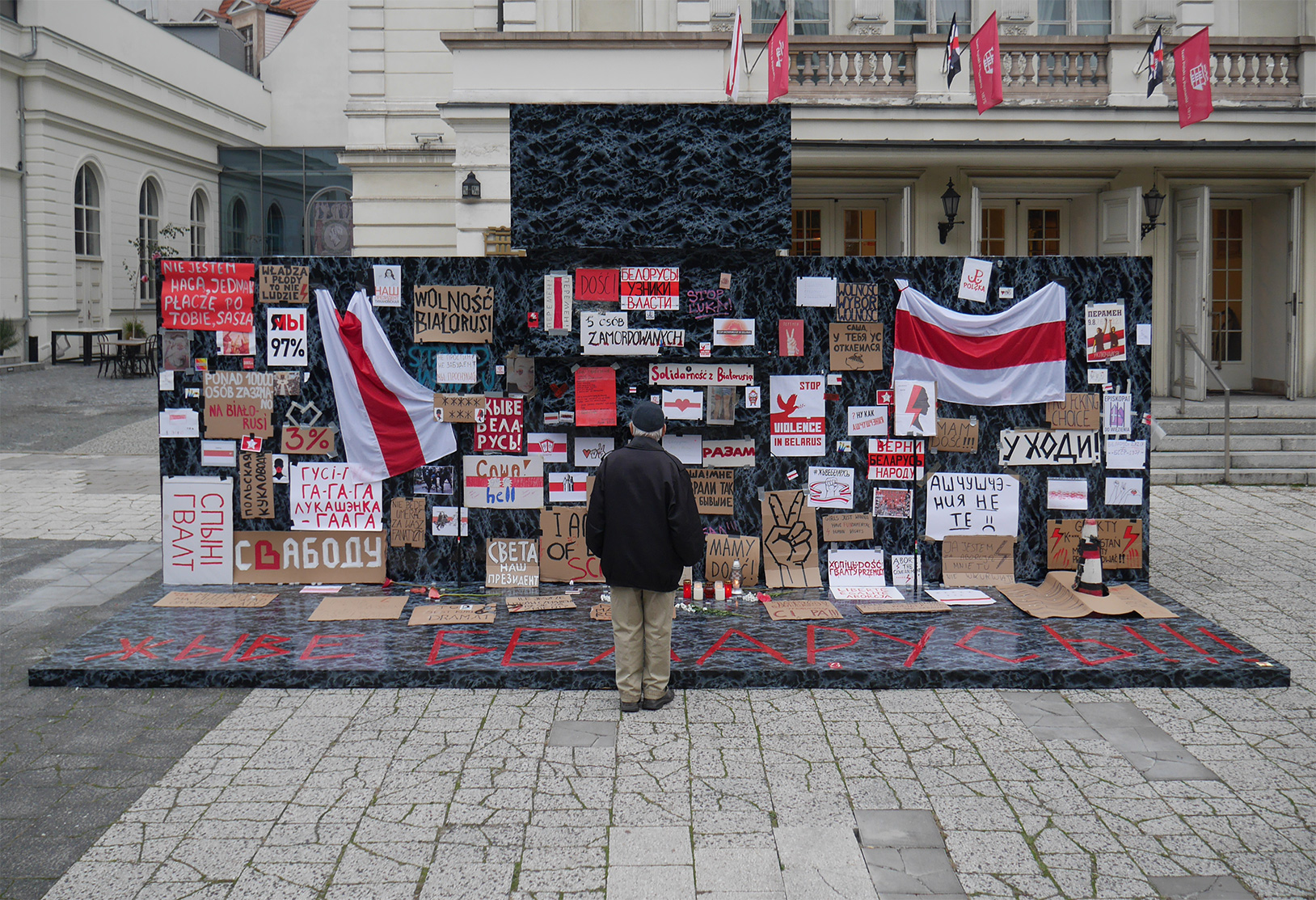 ‘Social Marble’ is the leitmotif of the series with the characteristic foil with fake stone pattern, quite ubiquitous amongst the New Europe’s interiors, used to protect the cupboards’ fronts but in more general sense also used by the employees of the cleaning services in Minsk to cover the parts of the stone facing at the metro stations covered with graffiti. The artist has presented the other chapters of the ‘Social Marble’ series in other venues, such as in front of the Teatr Polski, Pоznań, Poland (Social Marble: Scenery, October 22 — November 1, 2020). Here, in addition to slogans about Belarus, passers-by added many slogans from the current daily protests for women's rights in Poland. 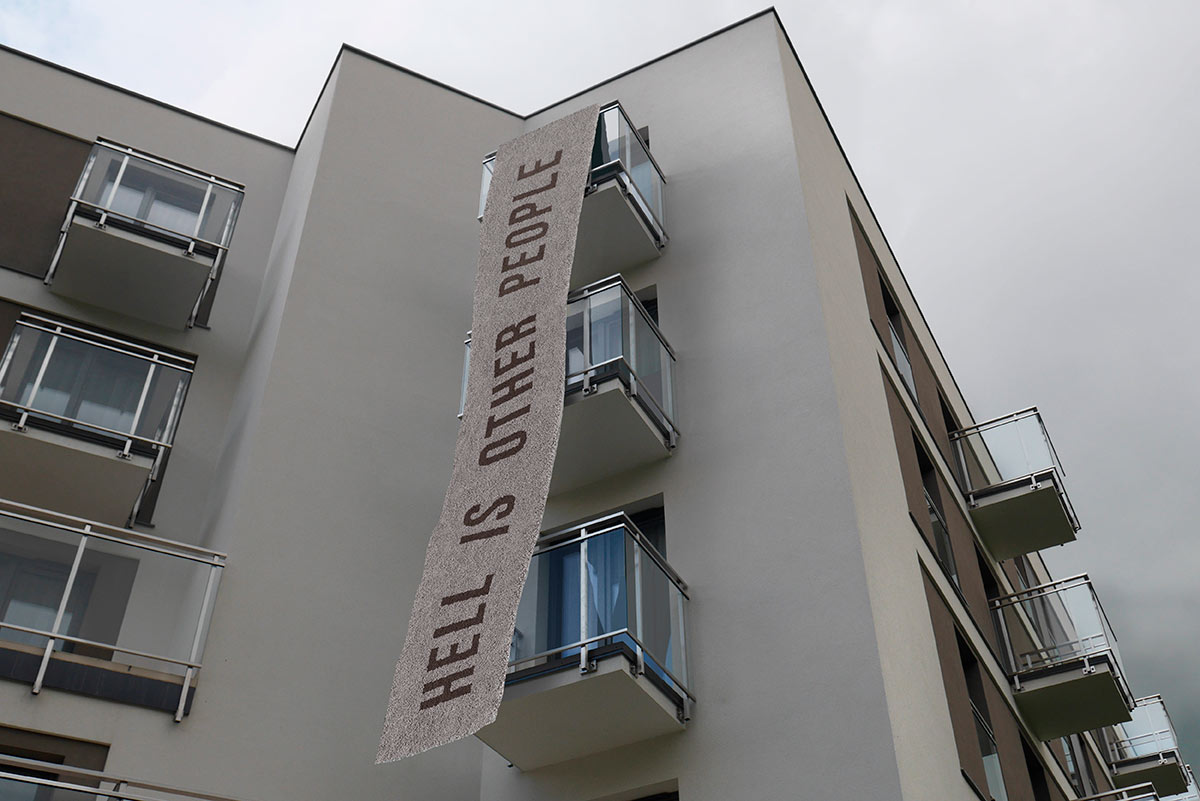 One of the earlier works by Shabohin Dusty Slogan was created during the pandemic. It is a carpet rephrasing the Jean-Paul Sartre’s famous sentence “Hell is other people” from his play No Exit, in the spirit of the need to ‘ventilate’ the old slogans. It had been put down from a balcony falling two storeys down, waving freely creating a banner intrusively covering two balconies beneath. The work was included in the online exhibition Solidarity and Agency earlier featured by Guest Rooms, also reviewed by Alex Fisher, who claims: “It is not red and white like the flag of Poland (or the Belarusian People’s Republic), blue with yellow accents for Europe, or rainbow. Shabohin’s message is camouflaged from prevailing/preceding ideology. Subsequently, it is stealth, surreptitiously affecting beyond stereotypes” [A. Fisher, Solidarity Asunder, TransitoryWhite, 14 July 2020]. · To find out more about SERGEY SHABOHIN’s work, keep eye on our Facebook and Instagram in the following weeks.

SERGEY SHABOHIN (b. 1984, Belarus) is a graduate of the Belarusian State Academy of Arts in Minsk (MA 2009) and operates as artist, curator, art activist, founder and editor-in-chief of ArtAktivist.org, a portal devoted to contemporary Belarusian art research platform kalektar.org. The main themes of his work are the interaction of the public and private realms, criticism of the cultural sphere and art history, or the role of contemporary museums and creating author’s archives, opening an invisible history, a category of fear and social body in the Belarusian society.
shabohin.com