VIEWED FROM ABOVE
—FLOR MAESEN 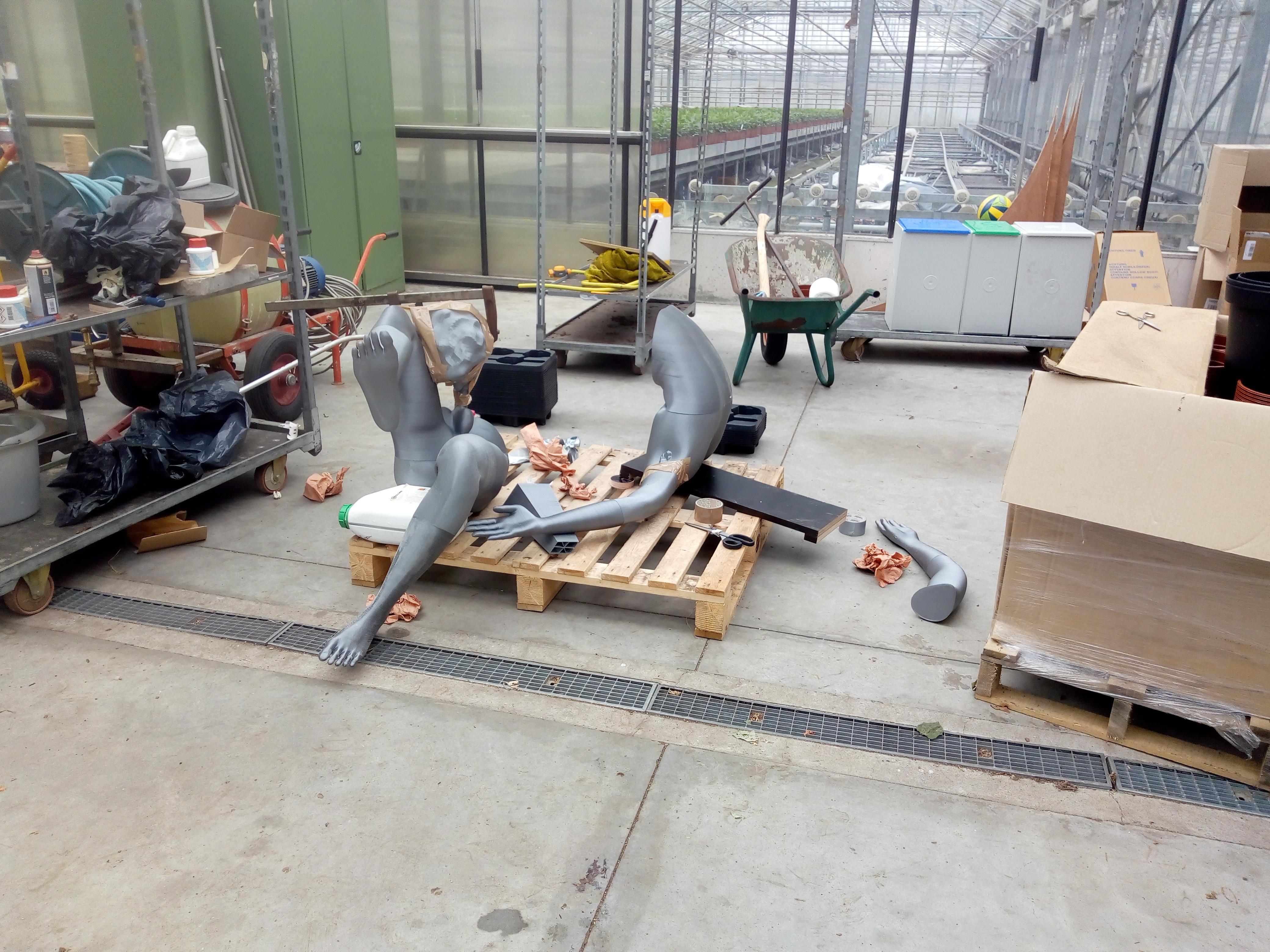 The man surrenders. We disappear with him, free-falling into swirling sewers. They call him the Self Sucking Man. As the man falls, our mind makes its way through his intestines. Upon entering, something creeps up on us. Something both repulsive and propulsive, both dark and light. The ego meets its shadow. Guts swirl and burn. Blood is pumping, hair waving, tunnels sloping, sinkholes shining. Two women’s voices engage in dialogue. Unruly, they rise, lie down again caressing. He gets right between our ears, fastens his teeth. They somersault together, enthuse, concuss and tingle, from head to neck to back. 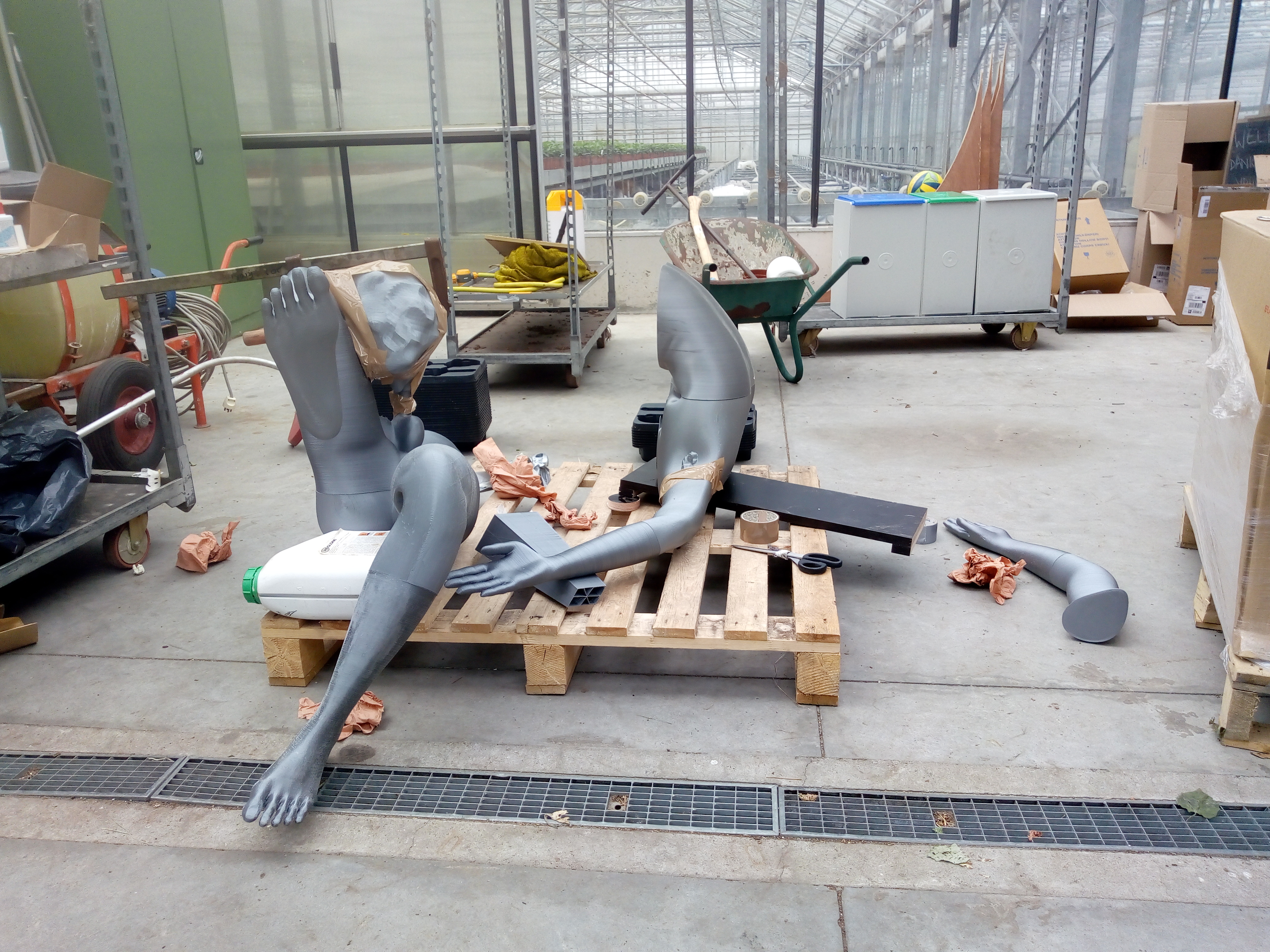 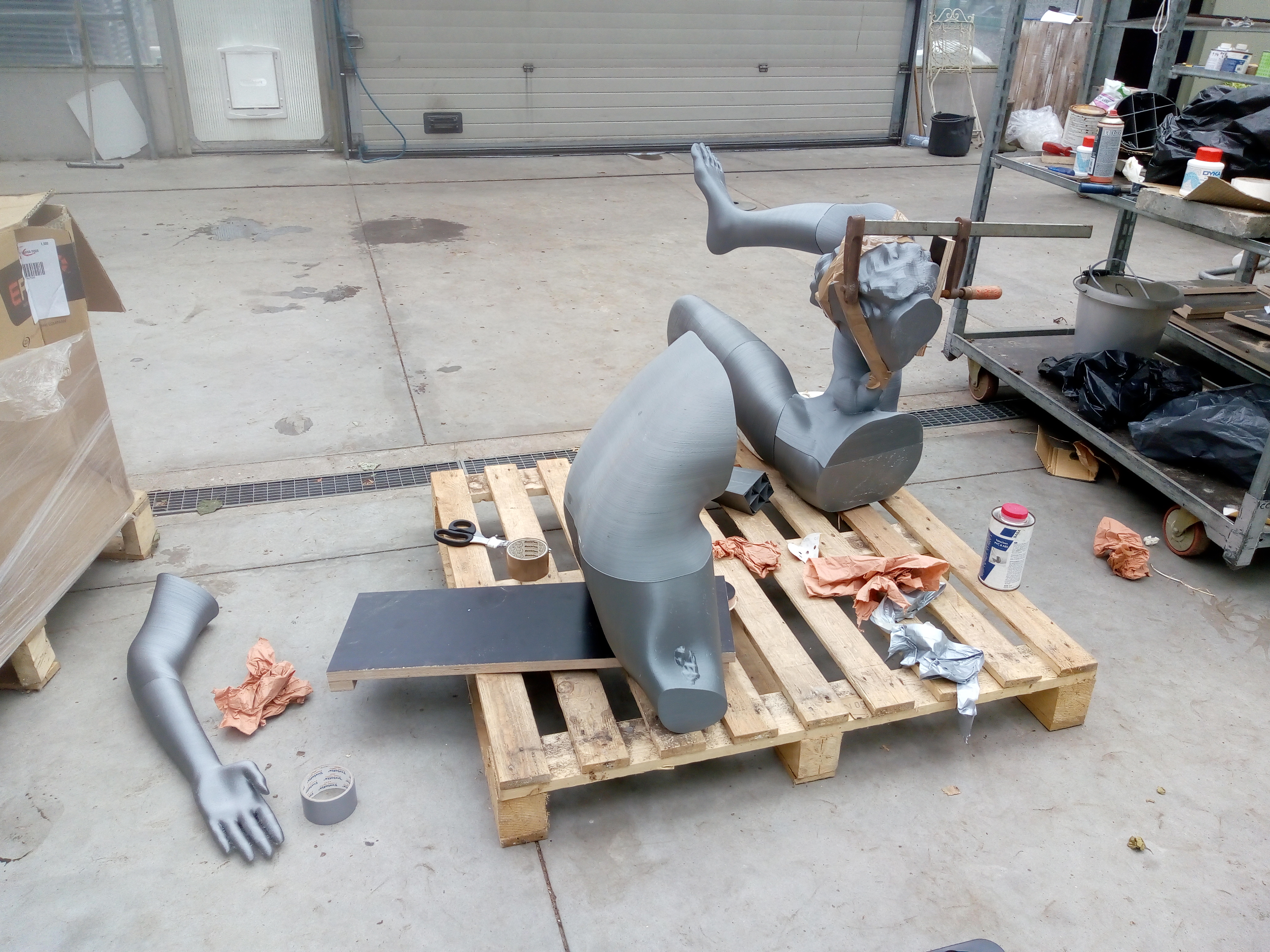 The man feeds himself. Even before the brain is able to redress the world, a current fully forces its way into the mouth. Thoughts leave his head, thunder into a black hole, only to breeze in again, upside down, back-to-front, inside out; moulted, absurd, trapped in the endless loop of the own skin. He gasps for breath, seeks salvation, sucks and stuffs himself. Grinding and ruminating repeatedly, but never satisfied. Anti-climax. His digestion digests as long as it’s doing fine. Is he (still) doing fine? 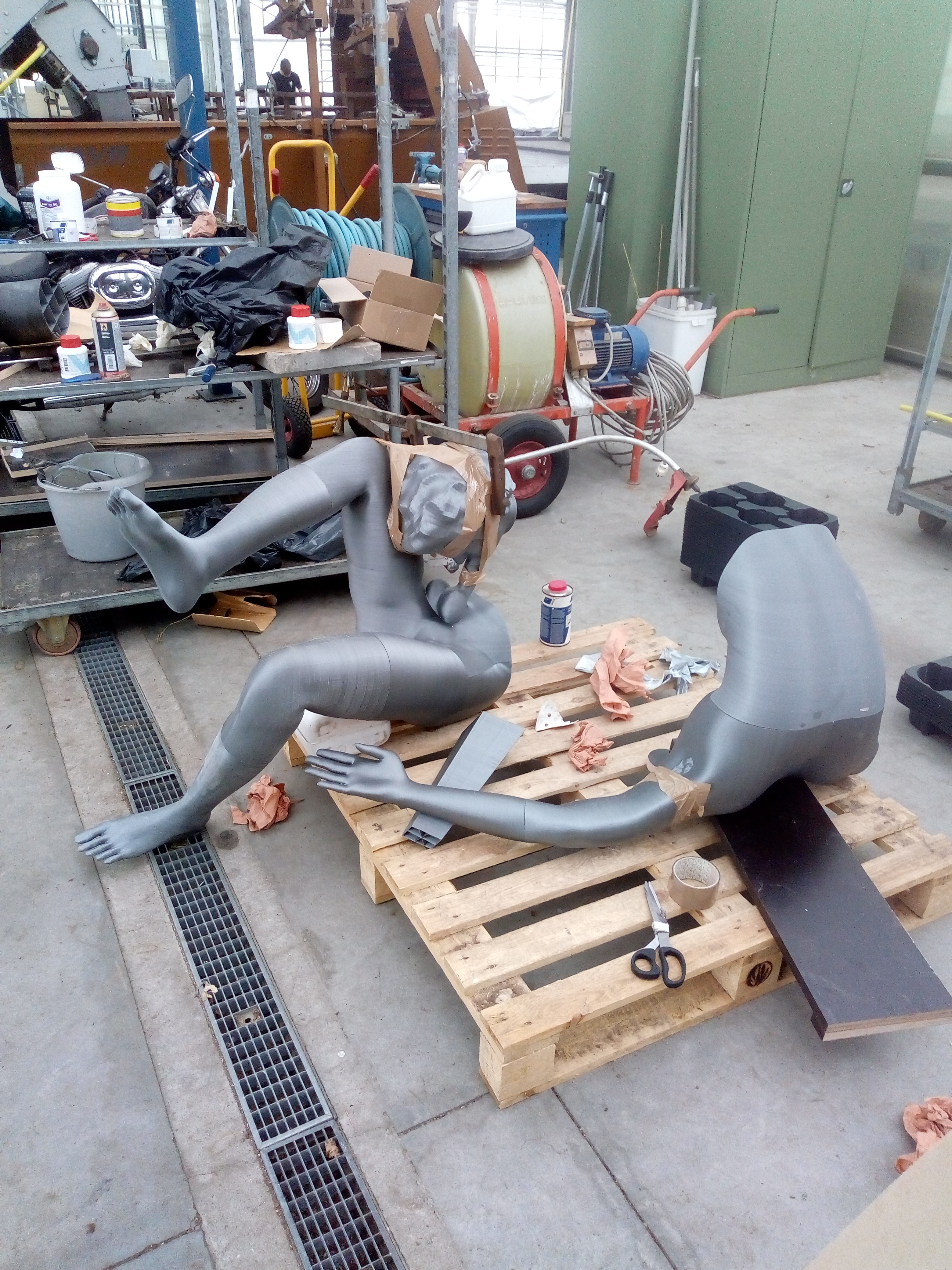 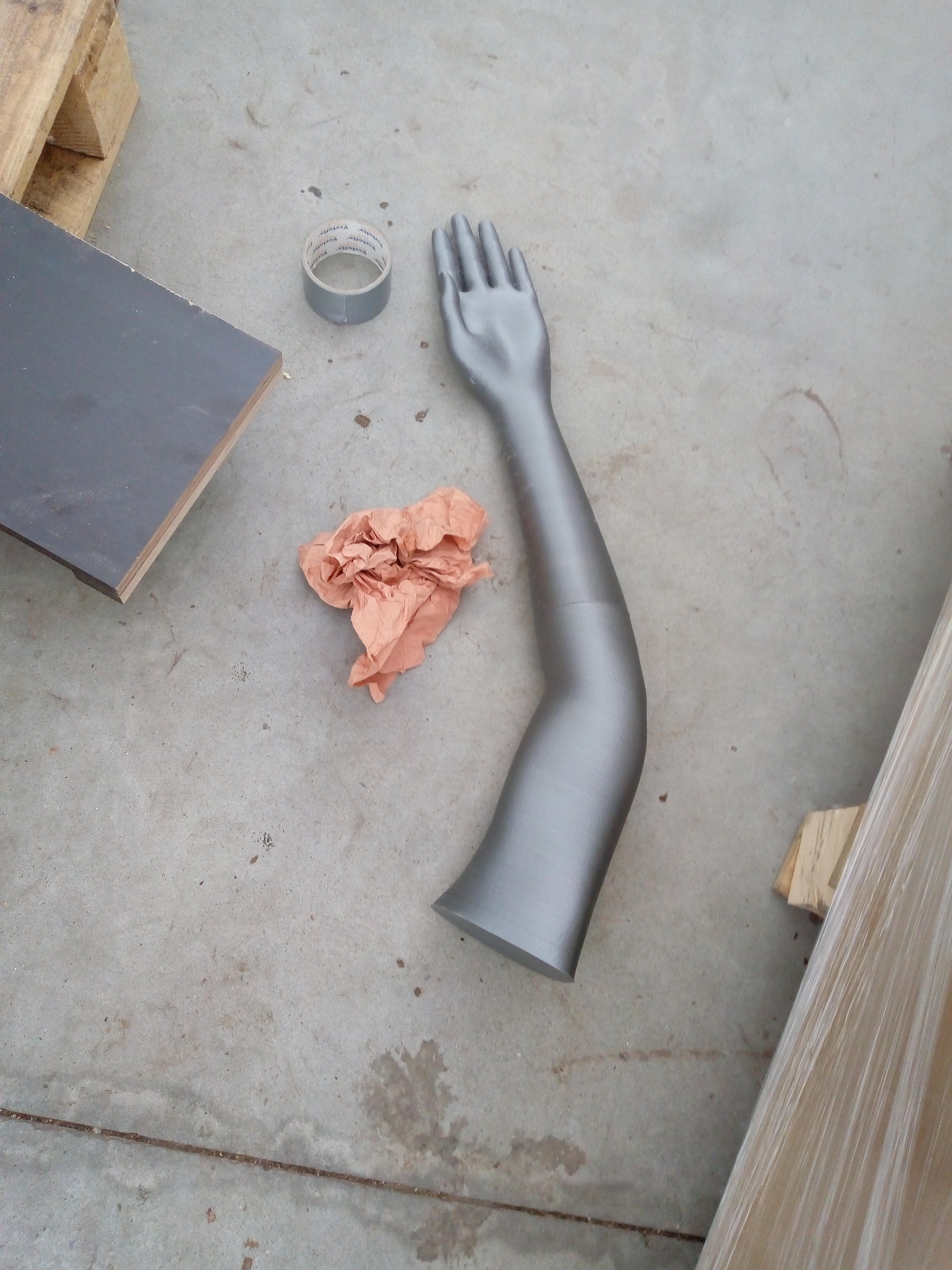 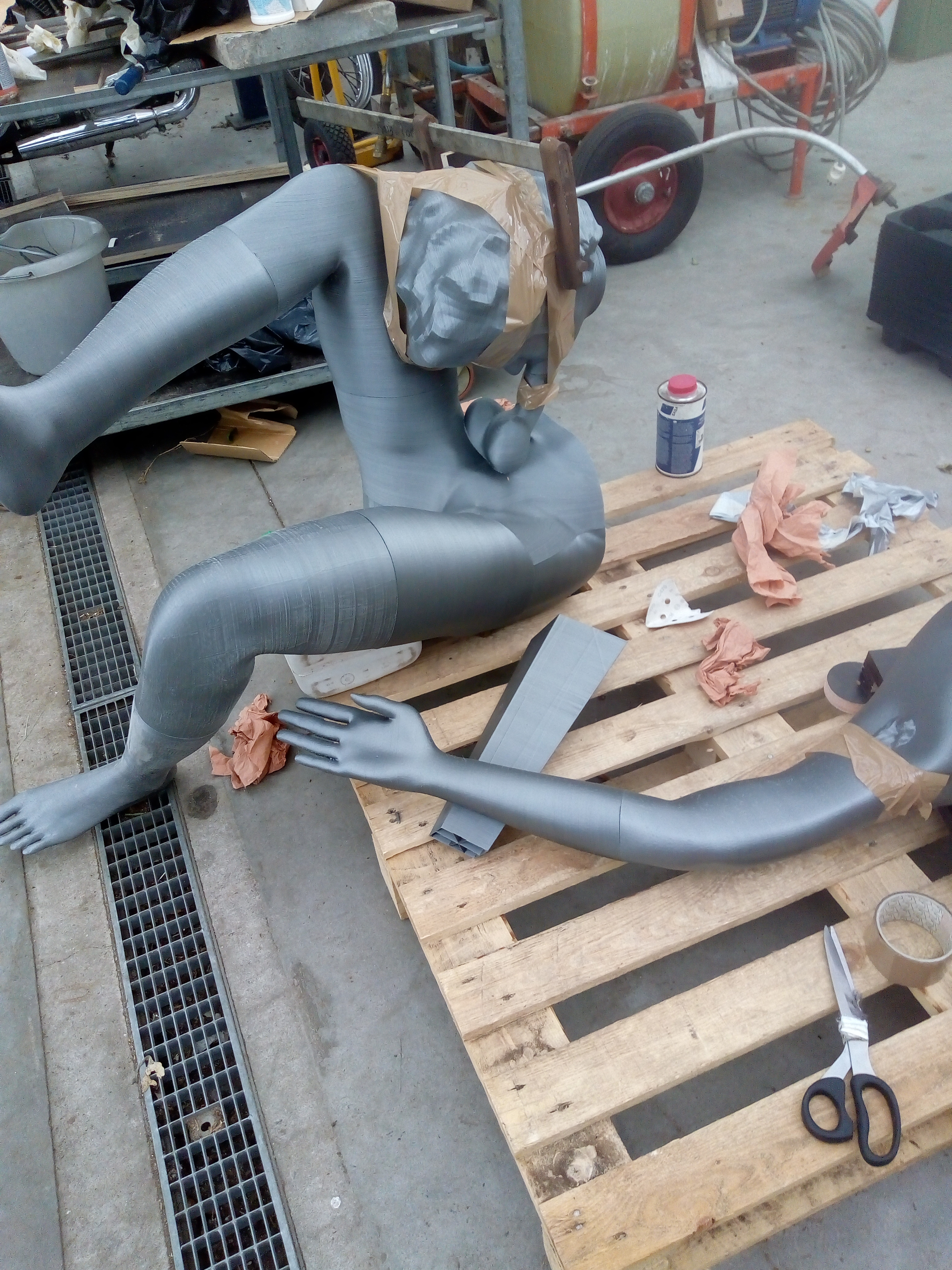 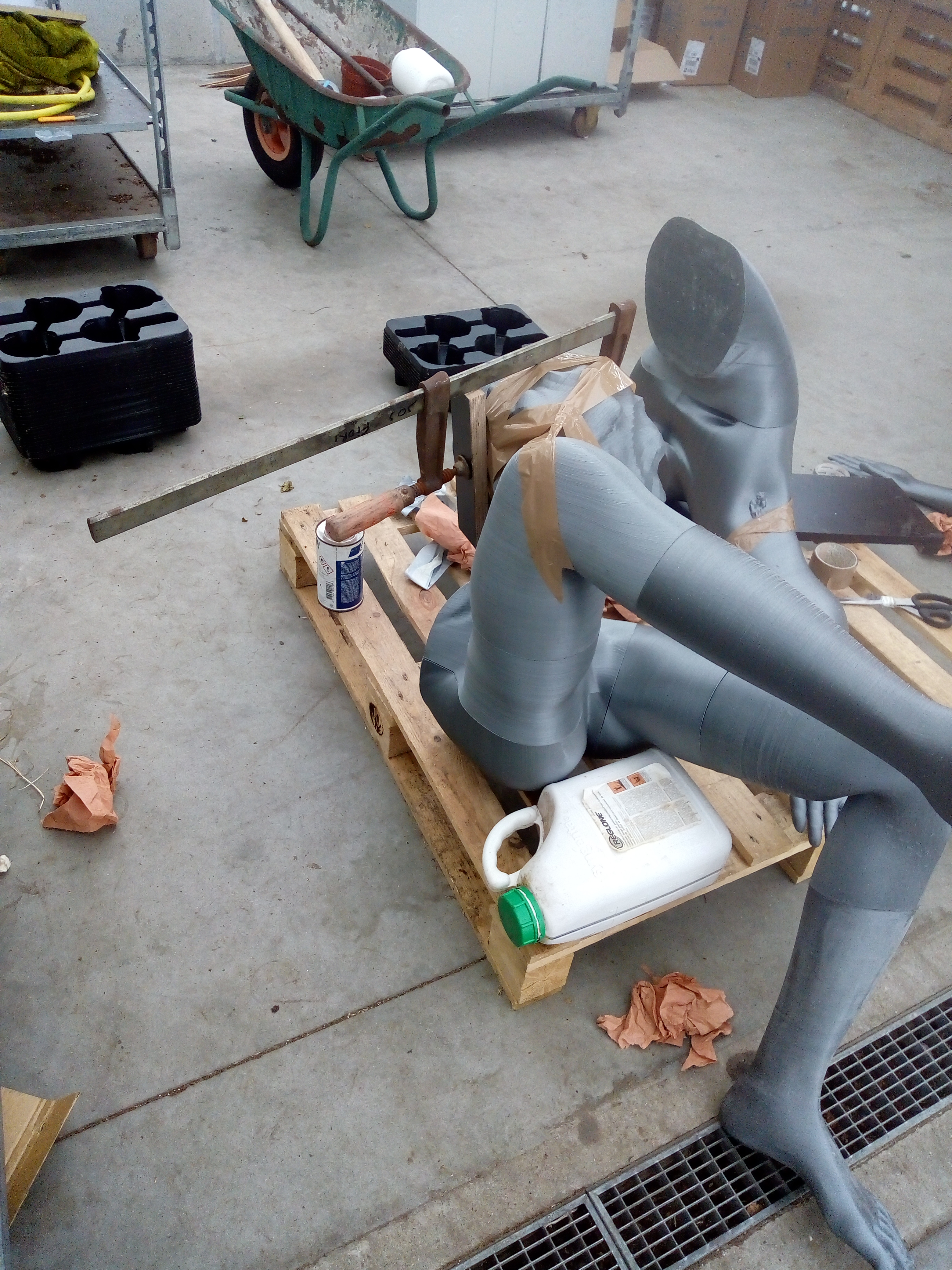 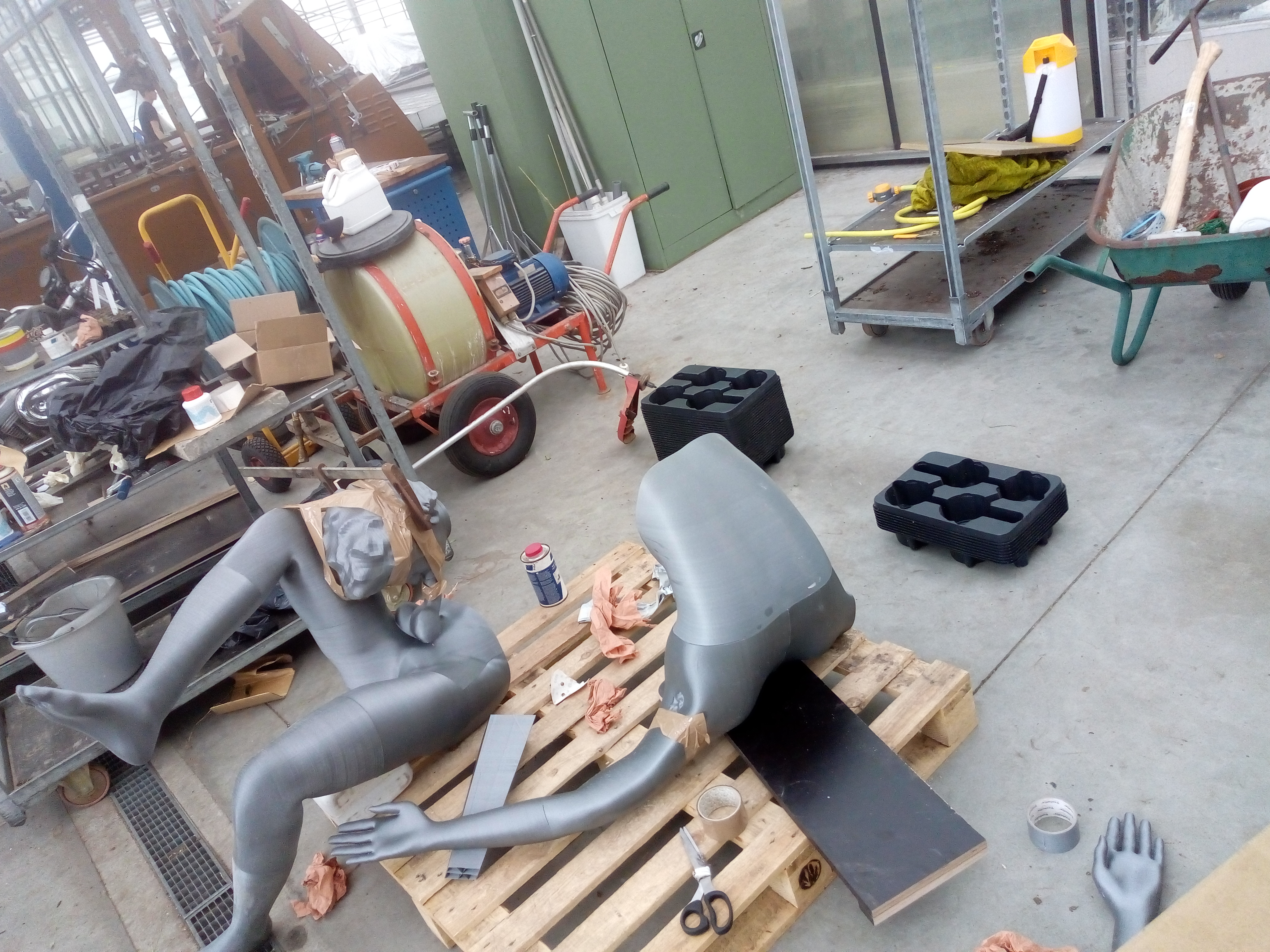 They say he radiates the heavy splendour of a barbarian. A god. One who’s sowing gods. His golden body shines like the sun, like an icon or a trophy. He’s overconfident but not invincible. A fallen angel or at the very least a demigod, perhaps? 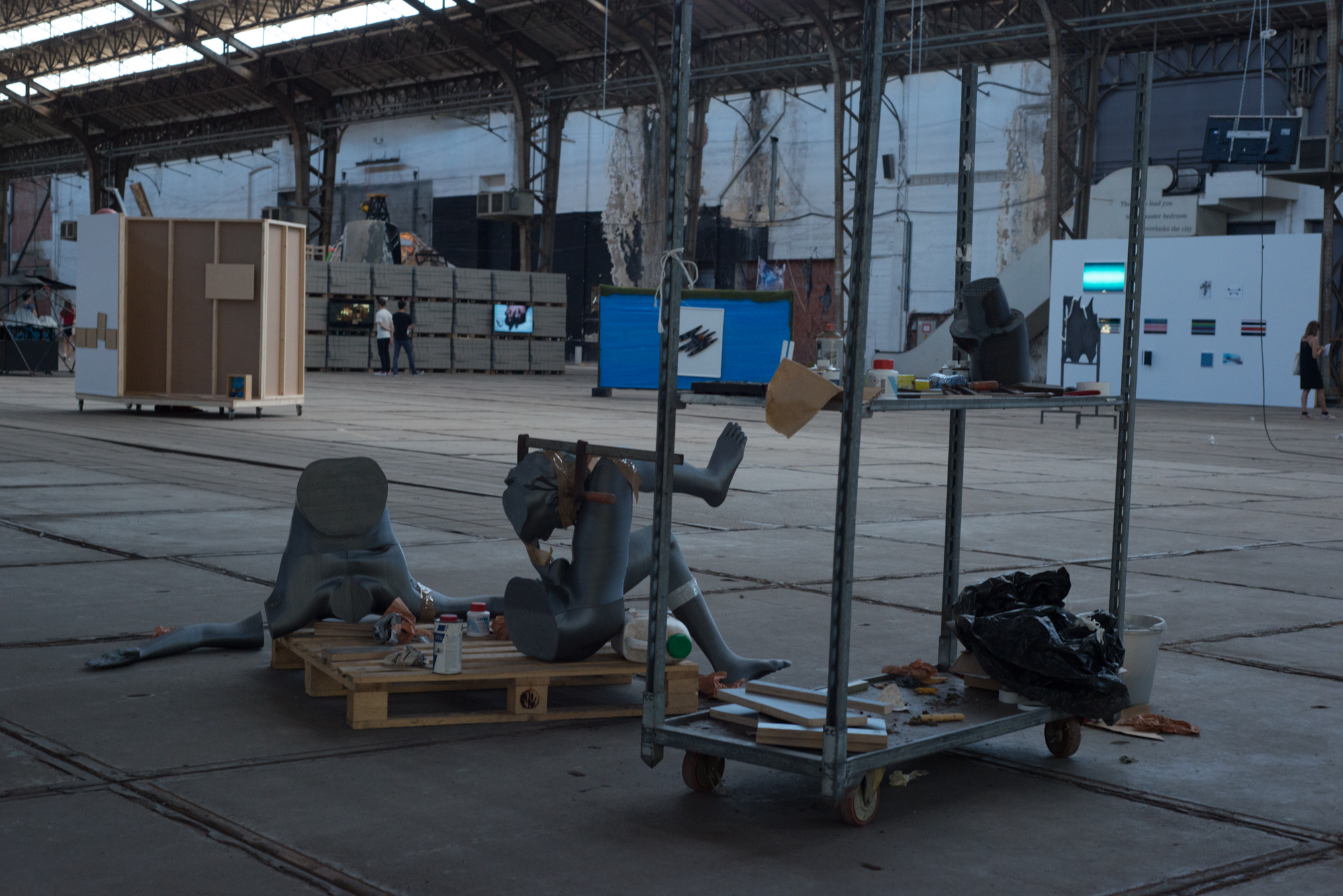 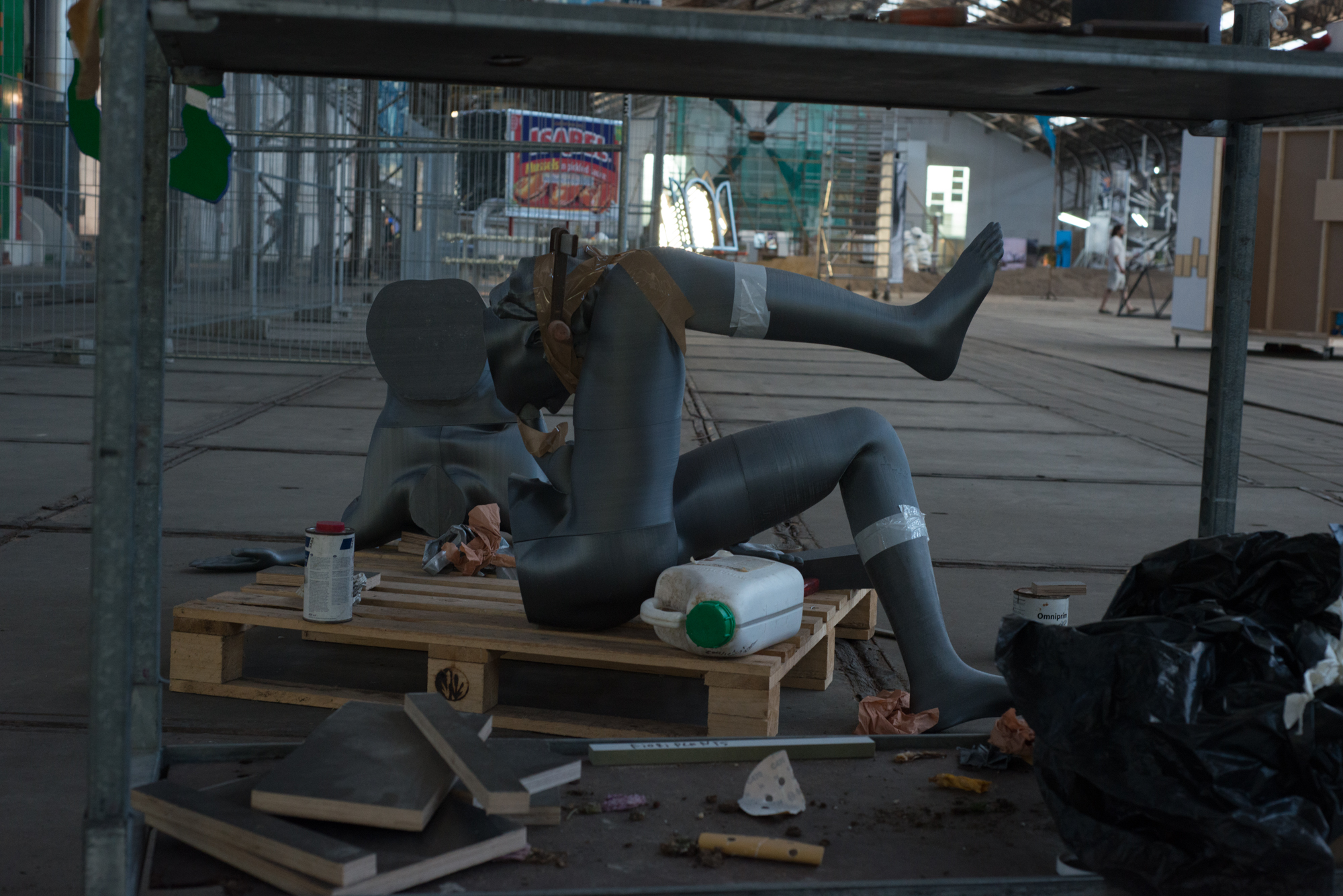 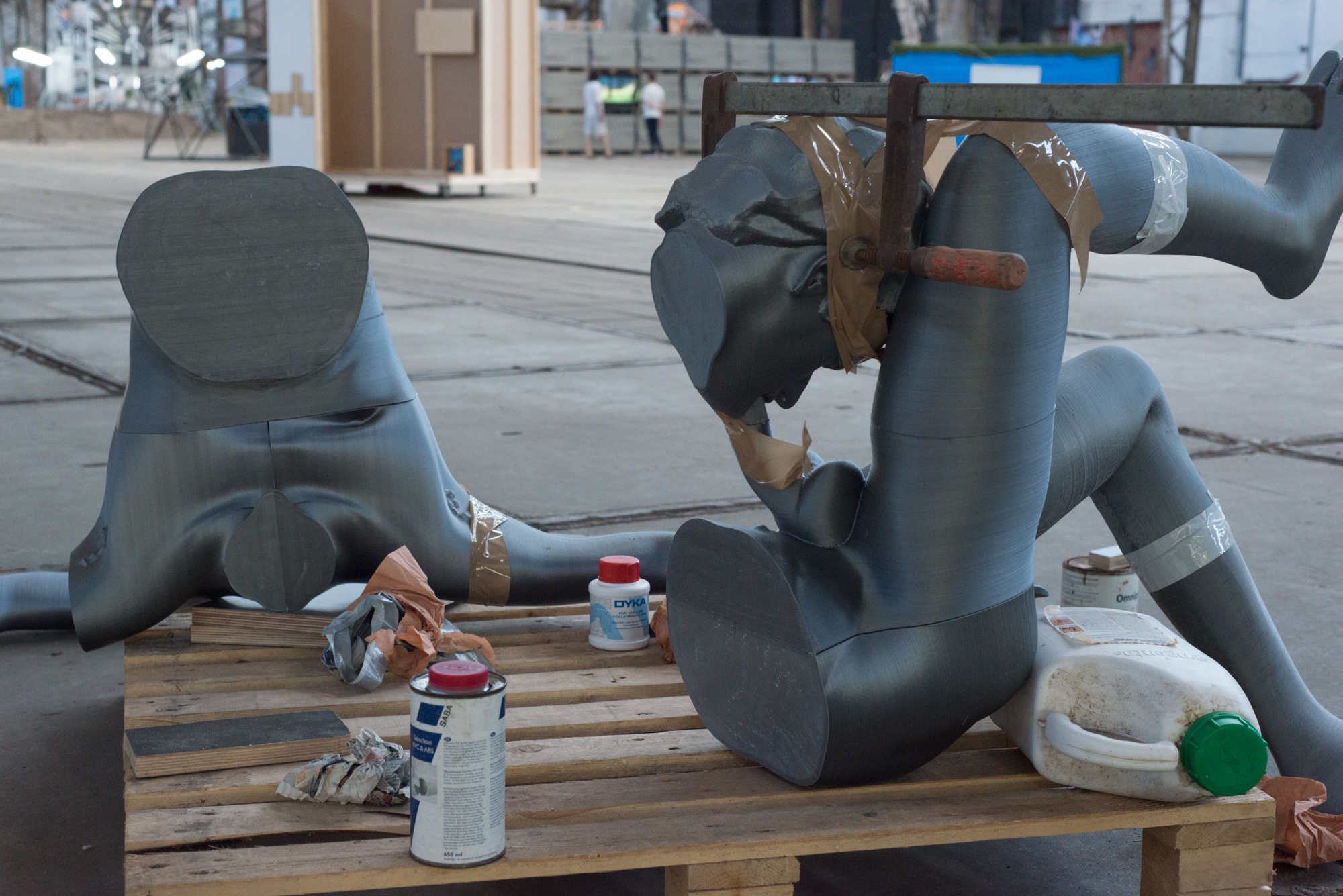 Self-glorification, haughtiness and outer pomp. Inner decay, torment and tragedy. Cracks leading back to some Greek original myth. Crete and Rhodes. Icarus smashed into the waters around Crete, and the Colossus of Rhodes would have been standing in, well, Rhodes. 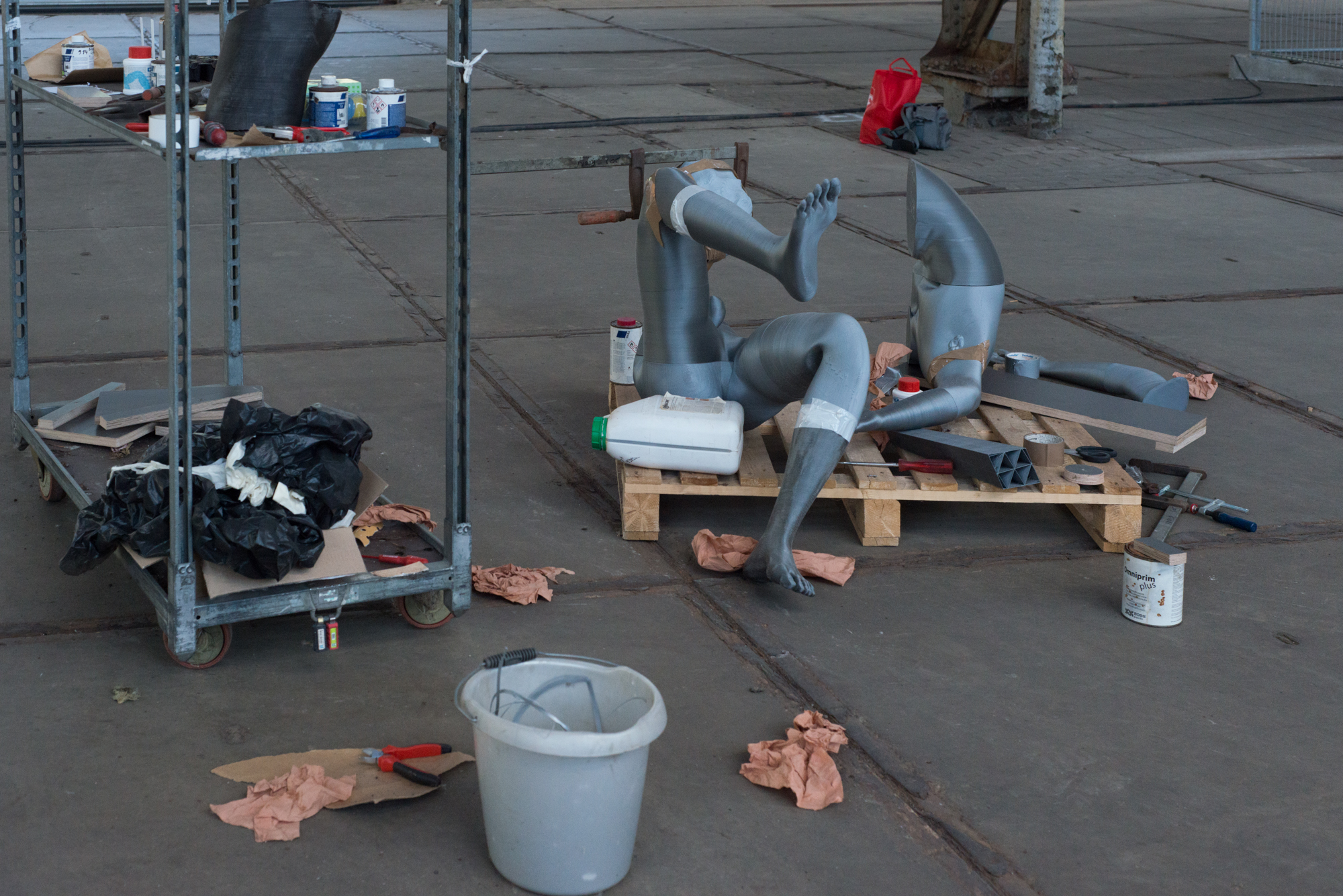 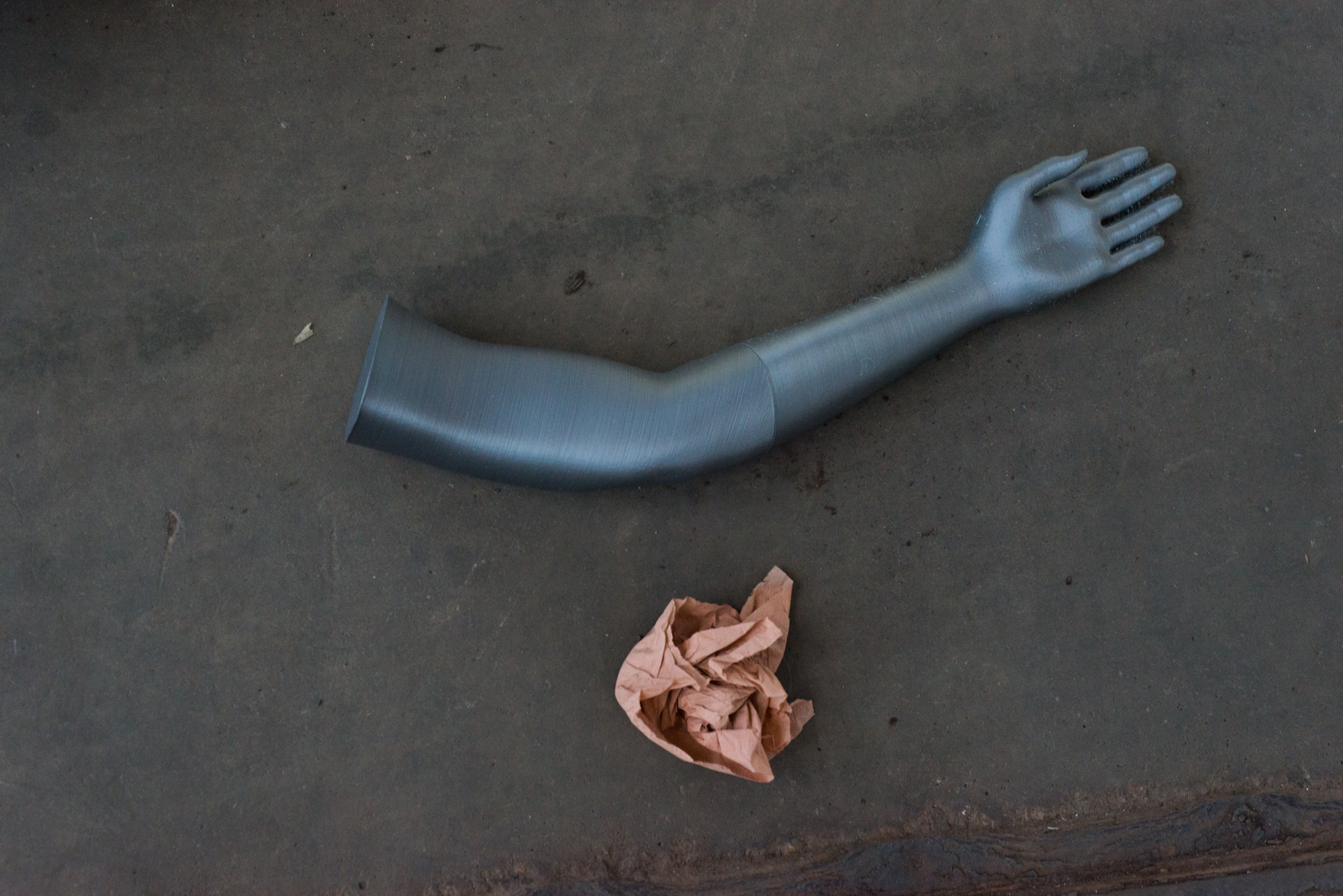 In order to escape from Crete, Icarus’ father gave him wings of wax. He flew too close to the sun and fell. On the other hand, the 33-metre-high bronze Colossus of Rhodes couldn’t get close enough to the sun. It was erected in honour of Helios, the city’s patron god. The Colossus only exists in ancient texts. No archaeological evidence or images of the era exist. We can only imagine what the statue must have looked like in the year 280 BC. 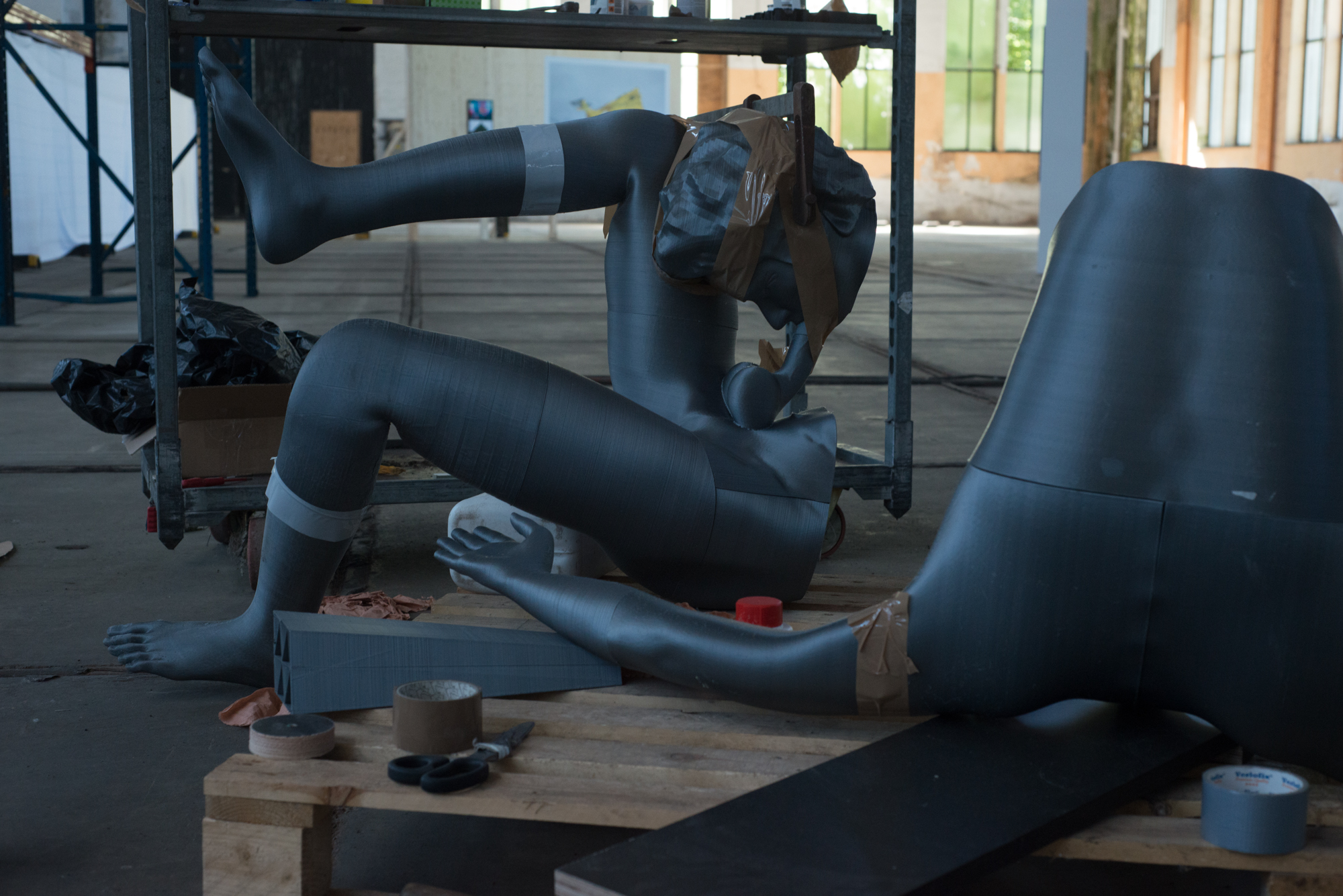 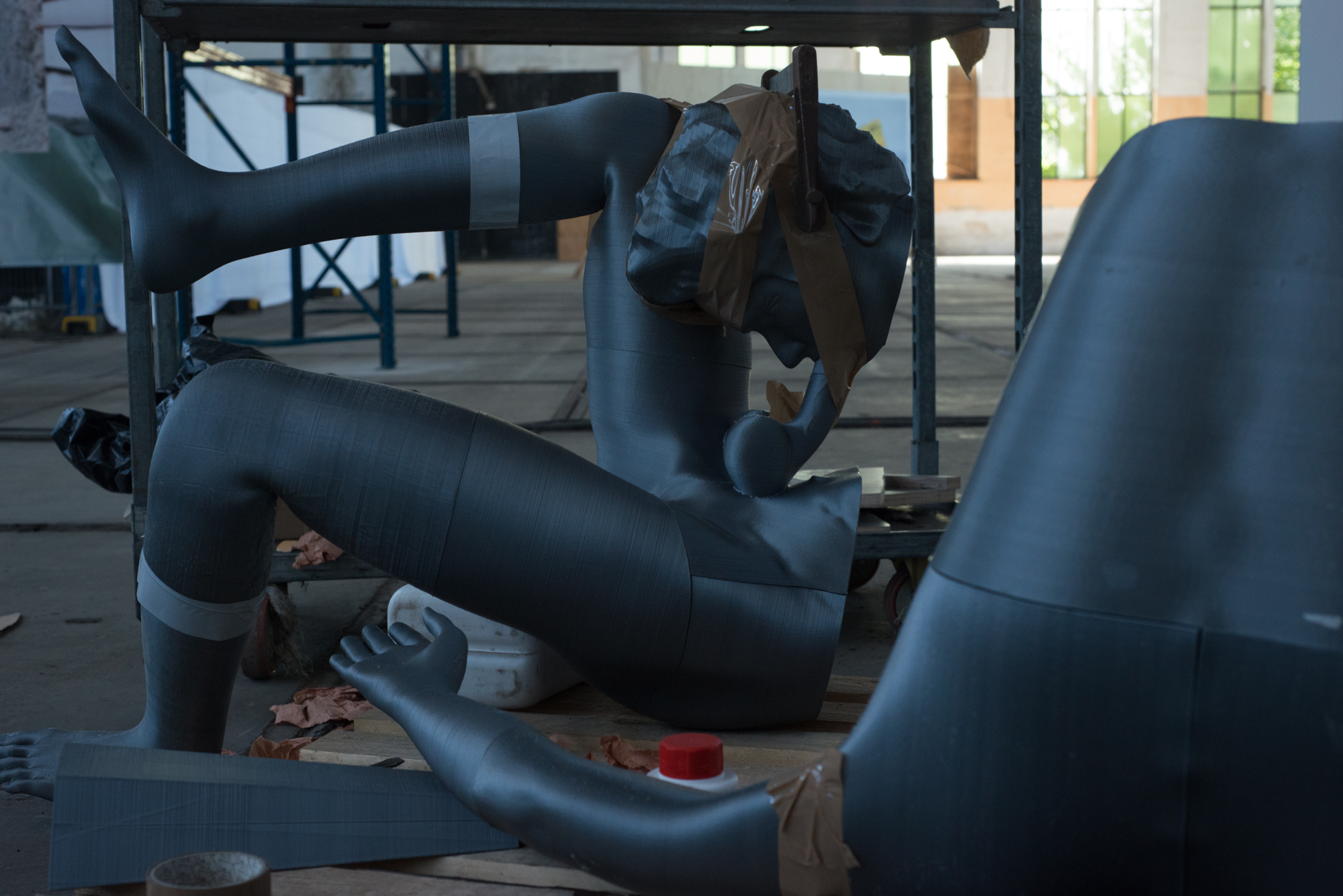 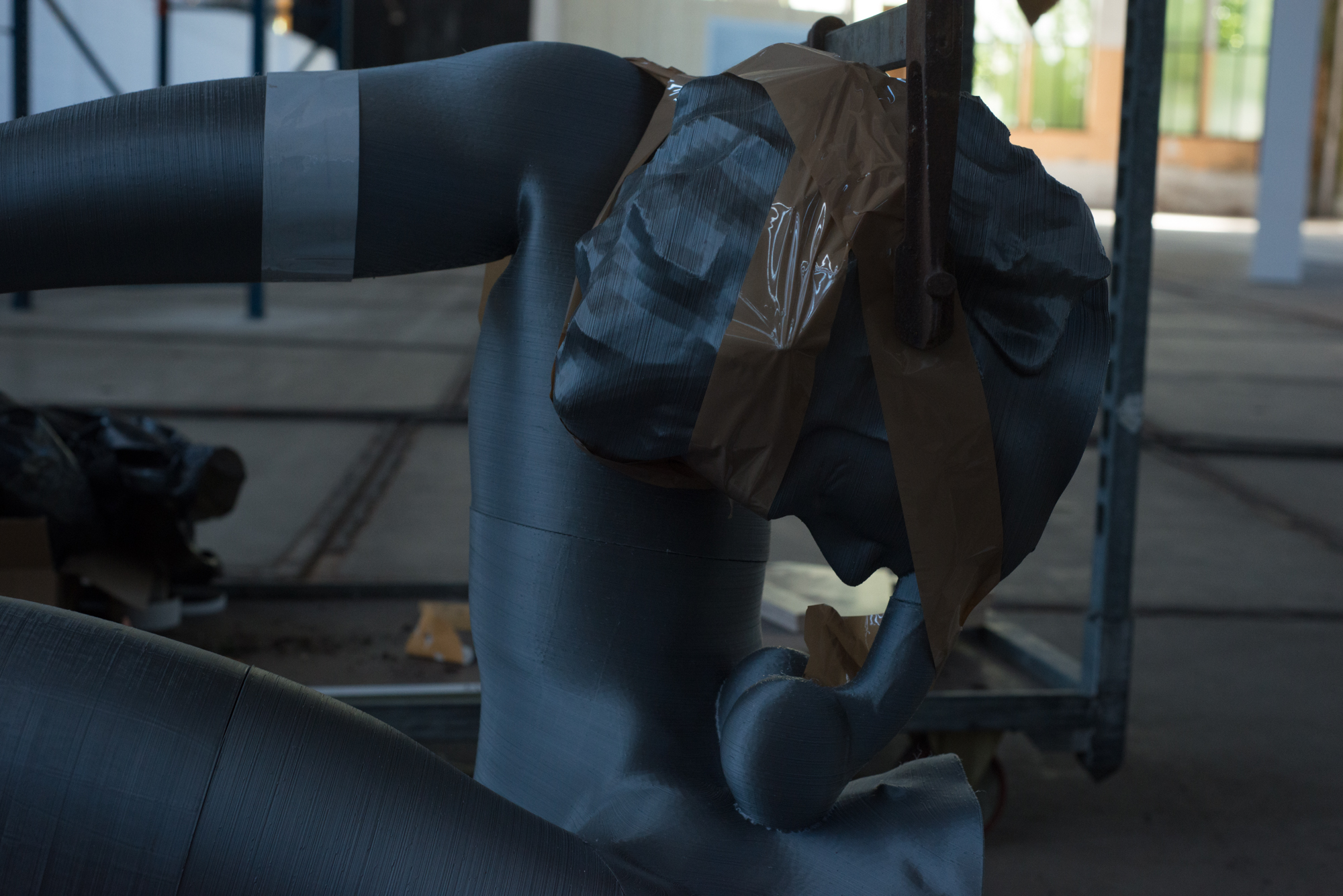 The thumb of Colossus could hardly be enclosed by human arms,
and the hollow spaces of its limbs seemed like caves 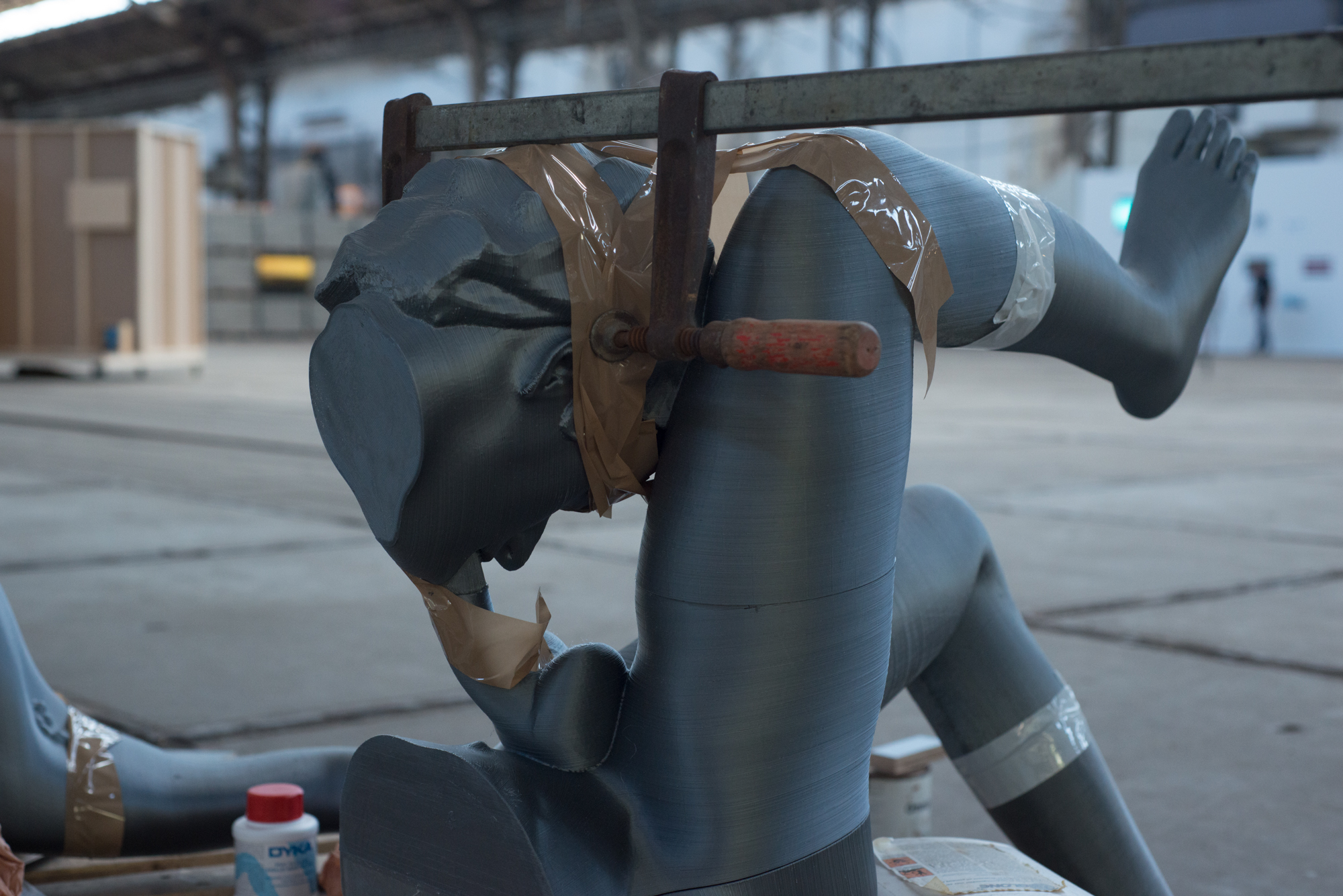 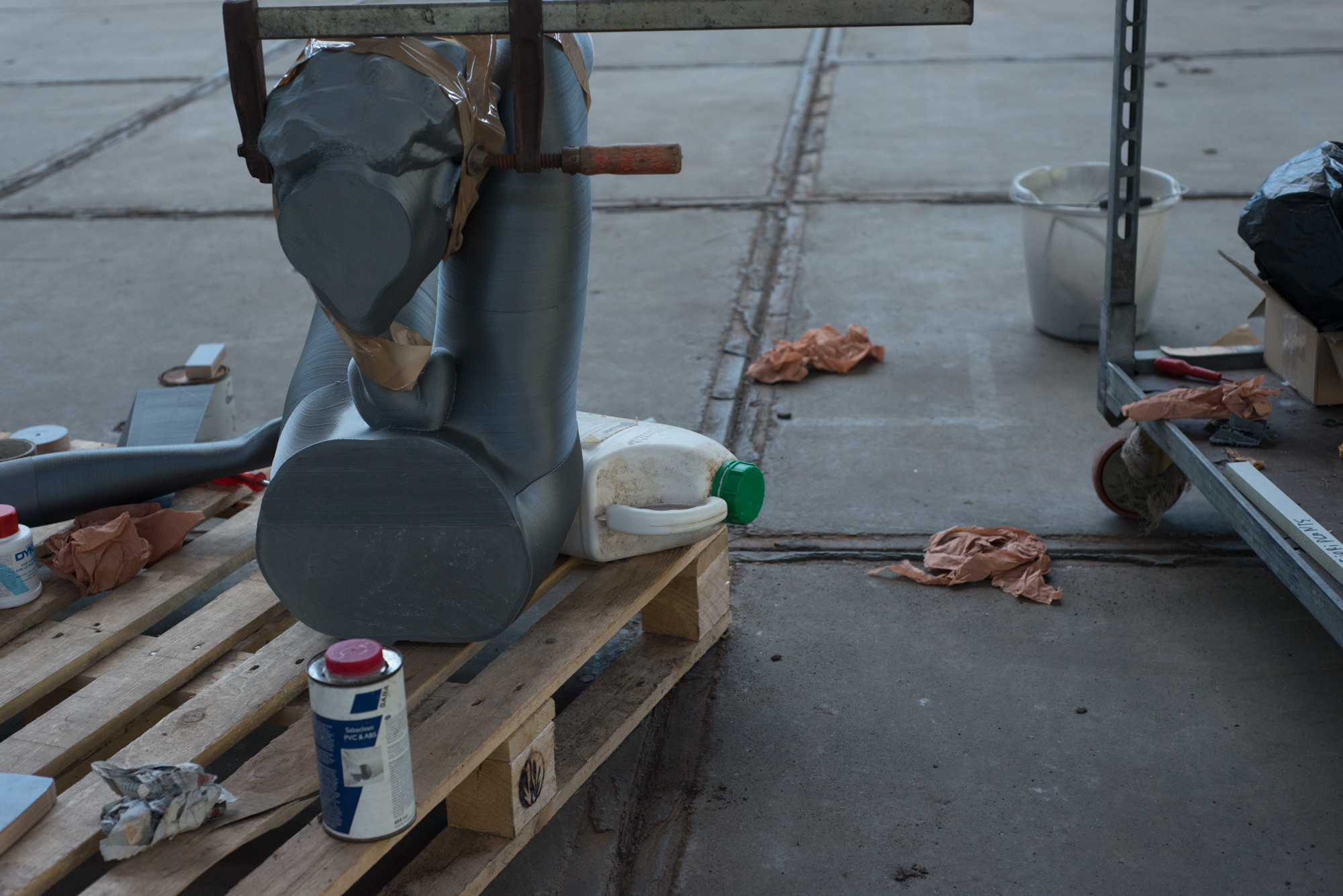 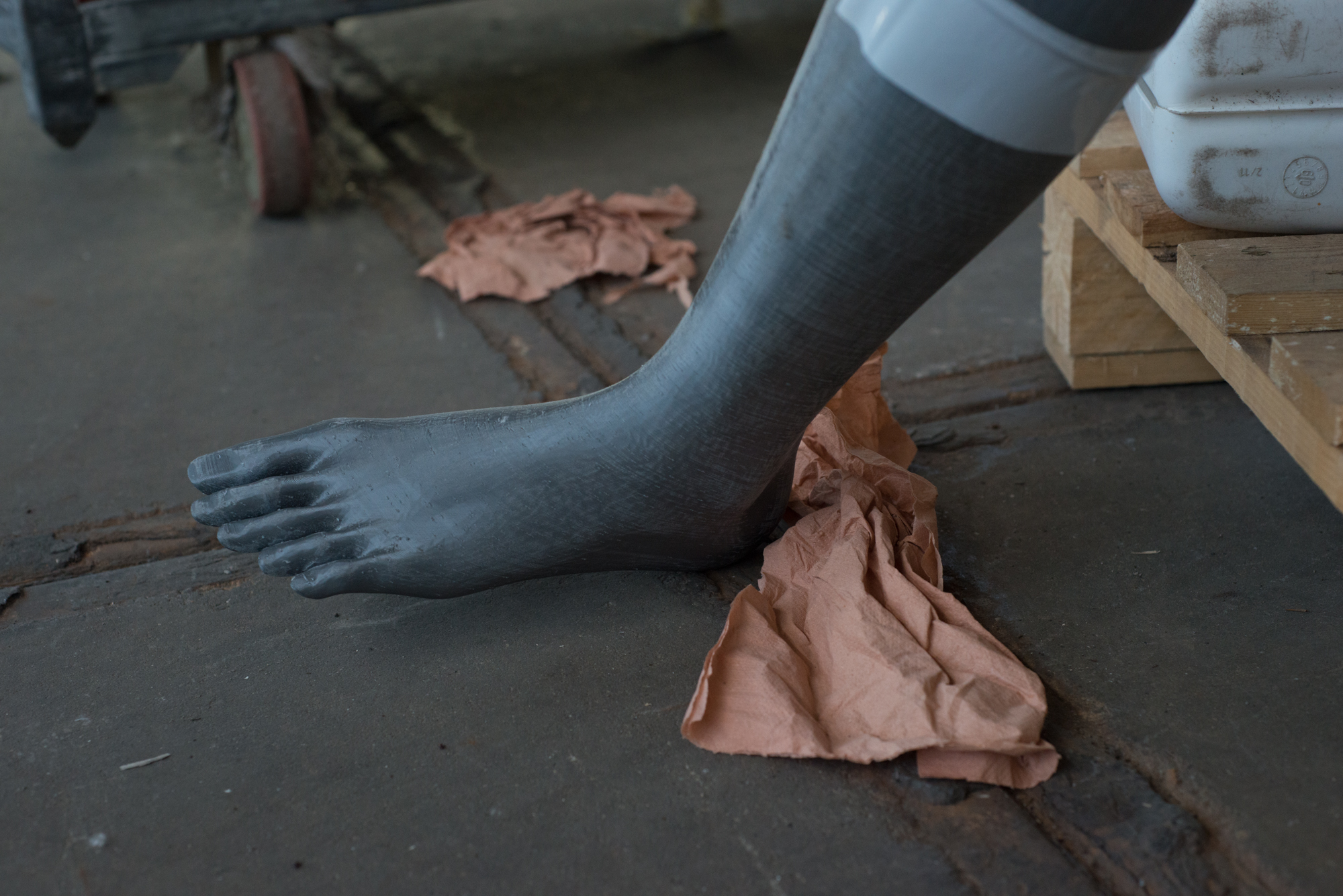 The geographer Strabo and the scholar Pliny the Elder did assume and measured moulds of men like this. The statue would have looked like the preserved effigies of Helios: a naked, beautiful and wavy-haired young man, covered by a seven-ray crown. 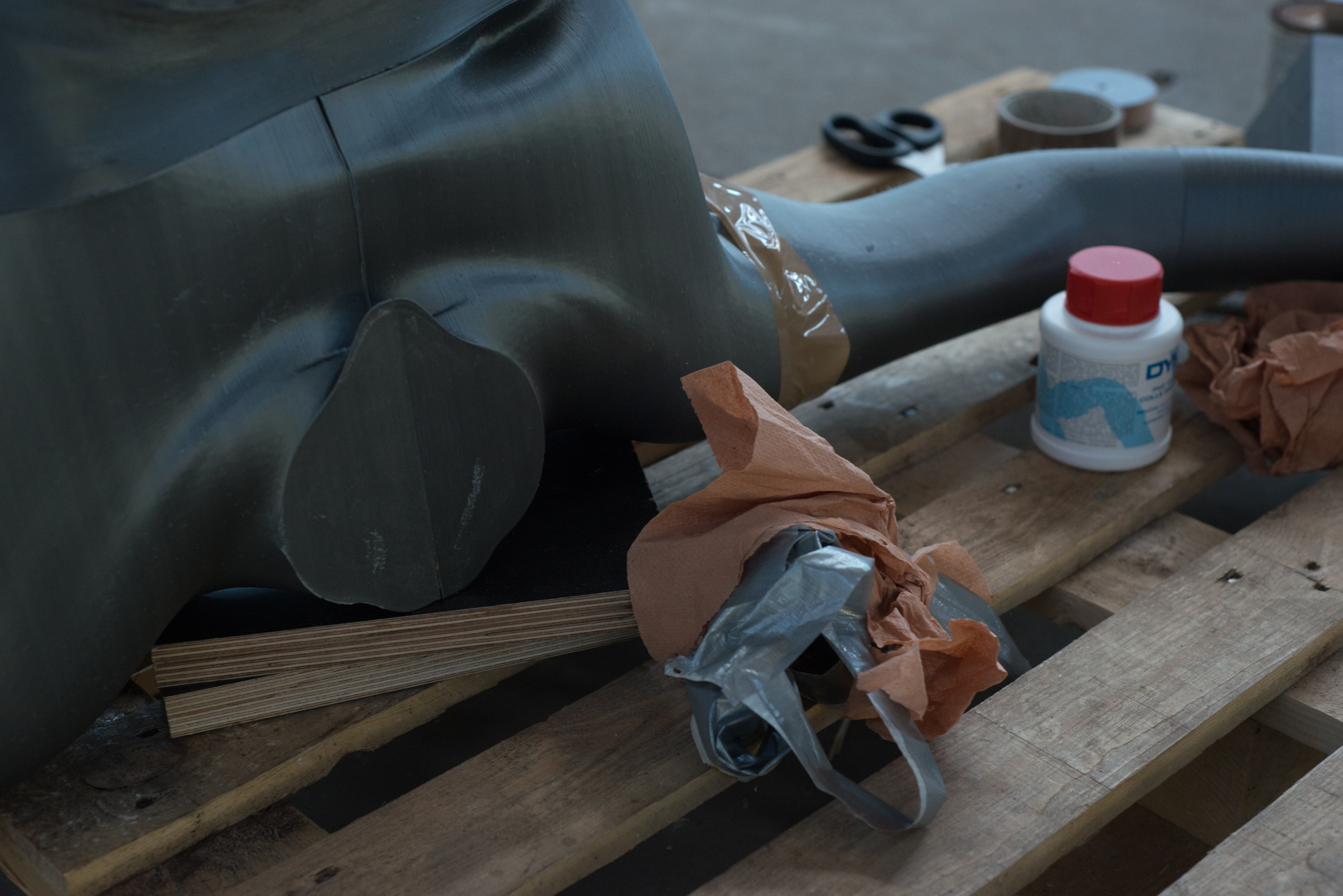 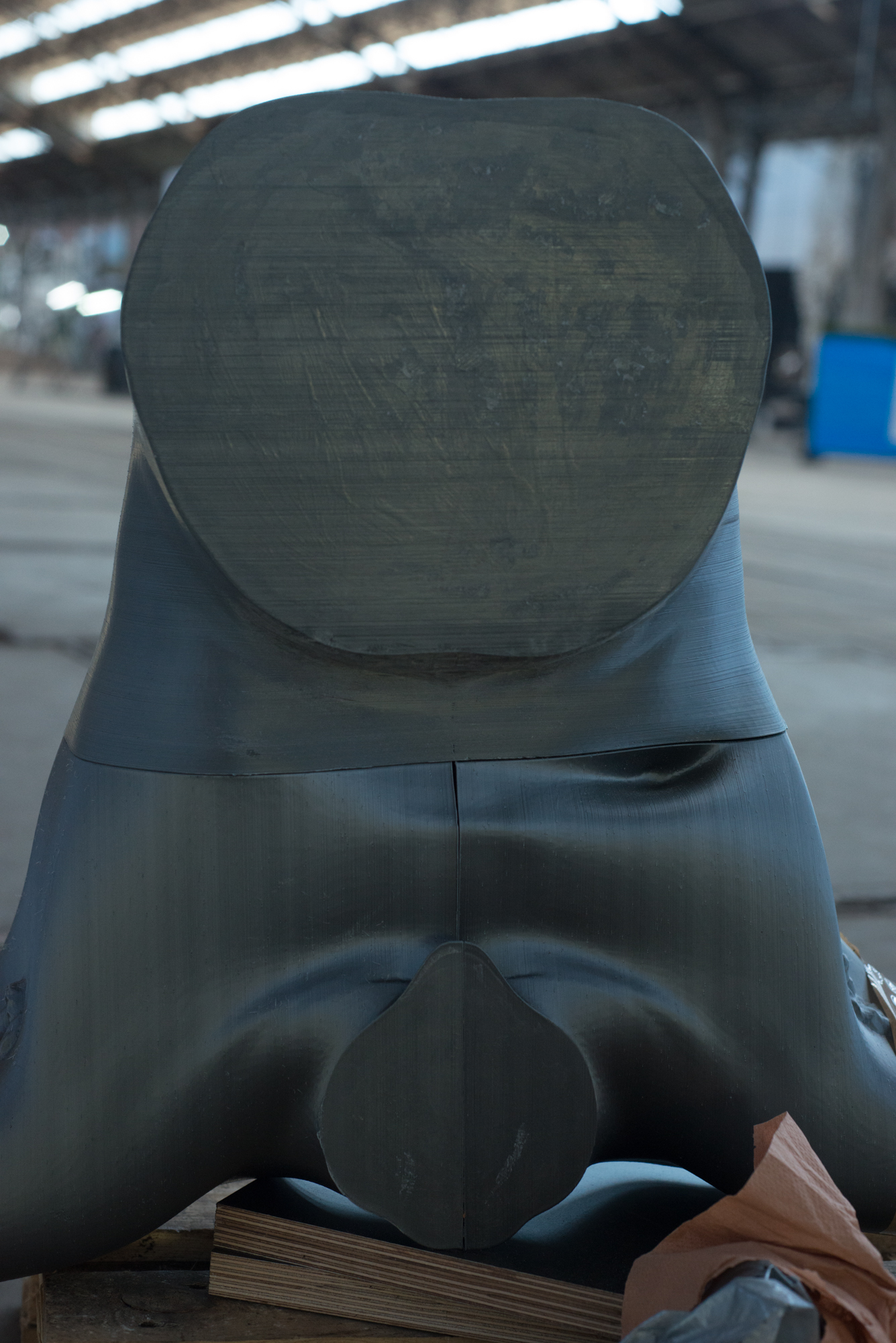 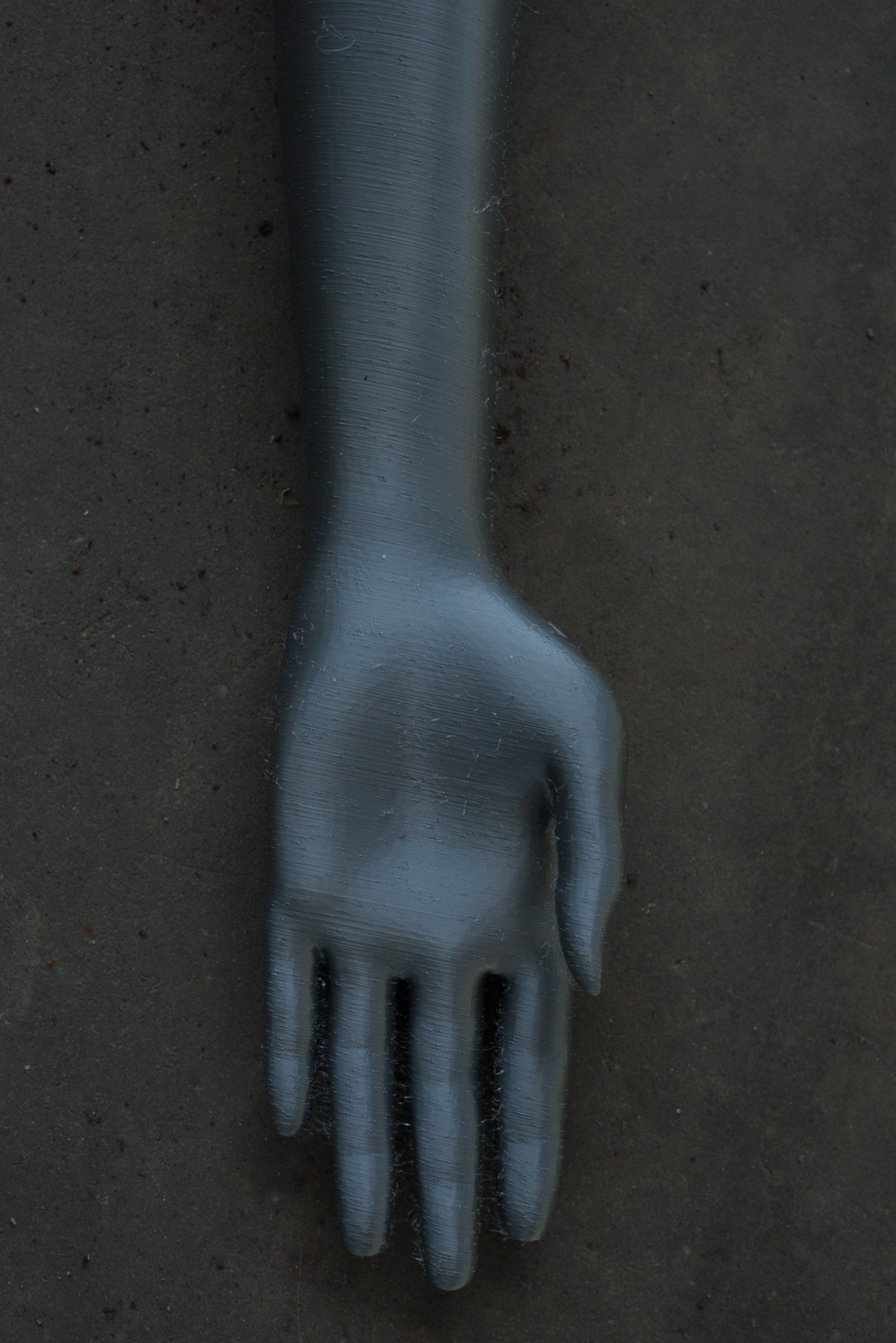 But in the end and more than anything, our stiffened, self-devouring man coincides with one of the oldest mythical symbols in the world. Ouroboros, the ancient creature eating its own tail, has no beginning nor end and, as such, symbolises the eternal, cyclical recurrence of all things. Tail eater or just the Holy Hole? We can keep guessing but we’ll use this hole to round up the story. 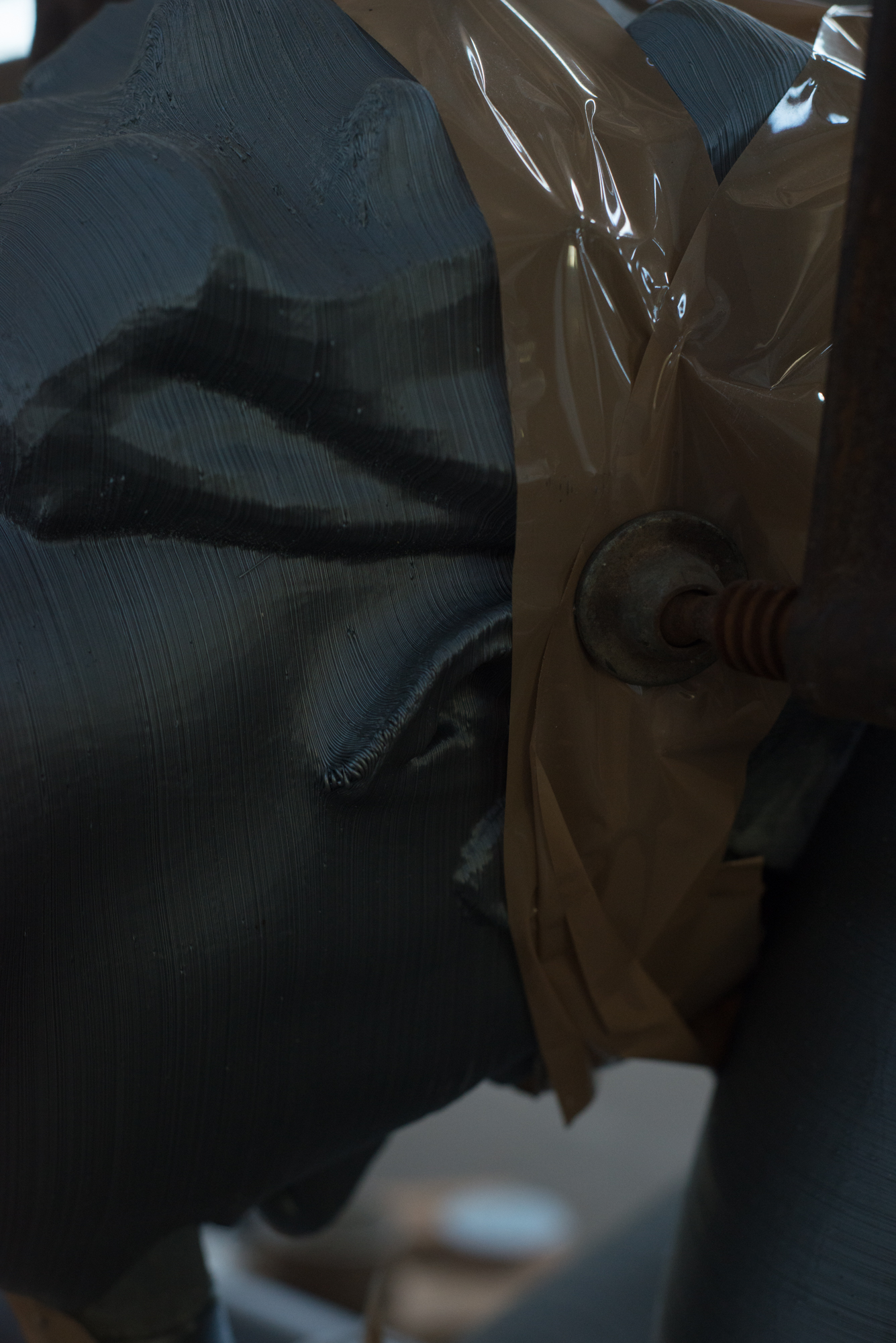 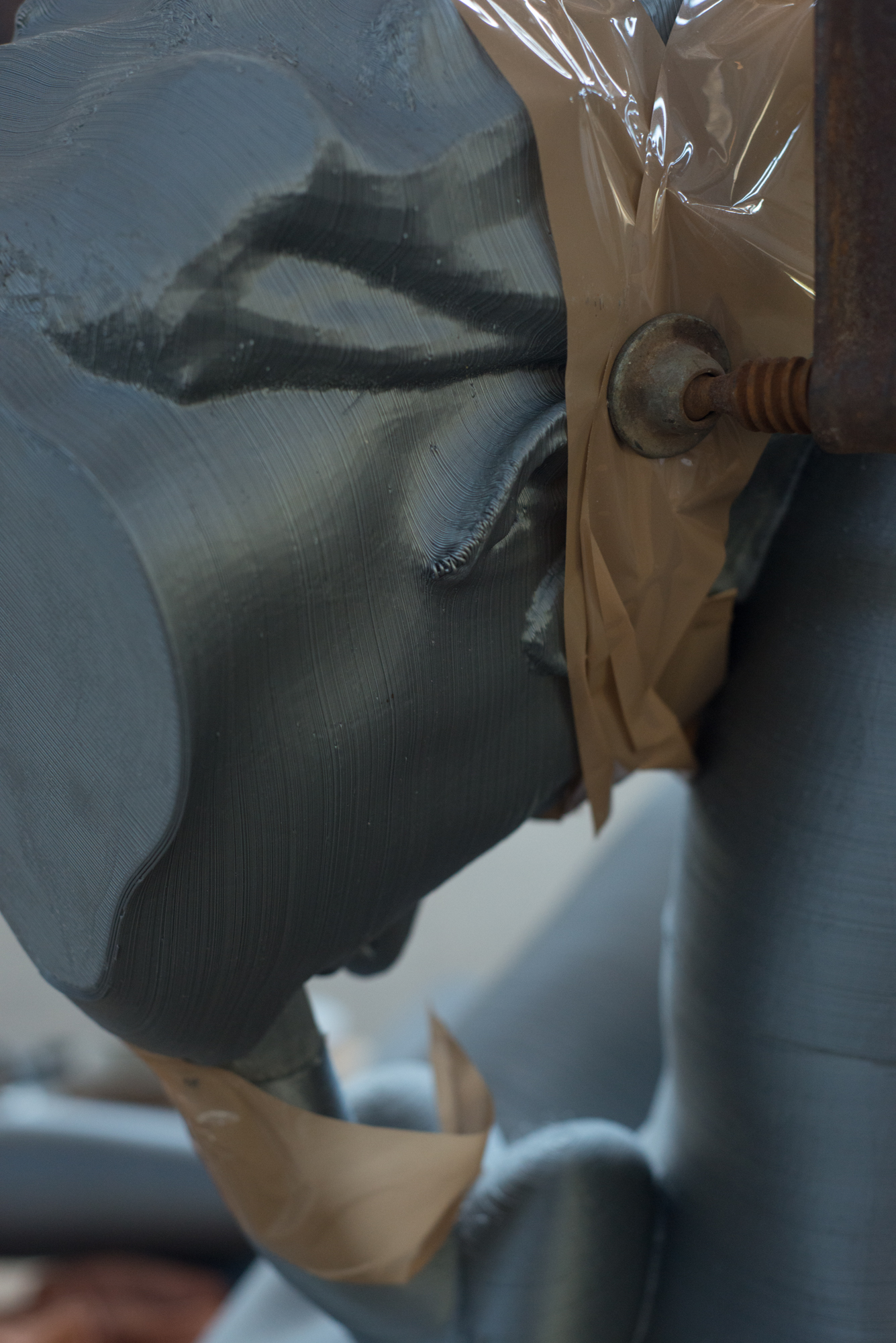 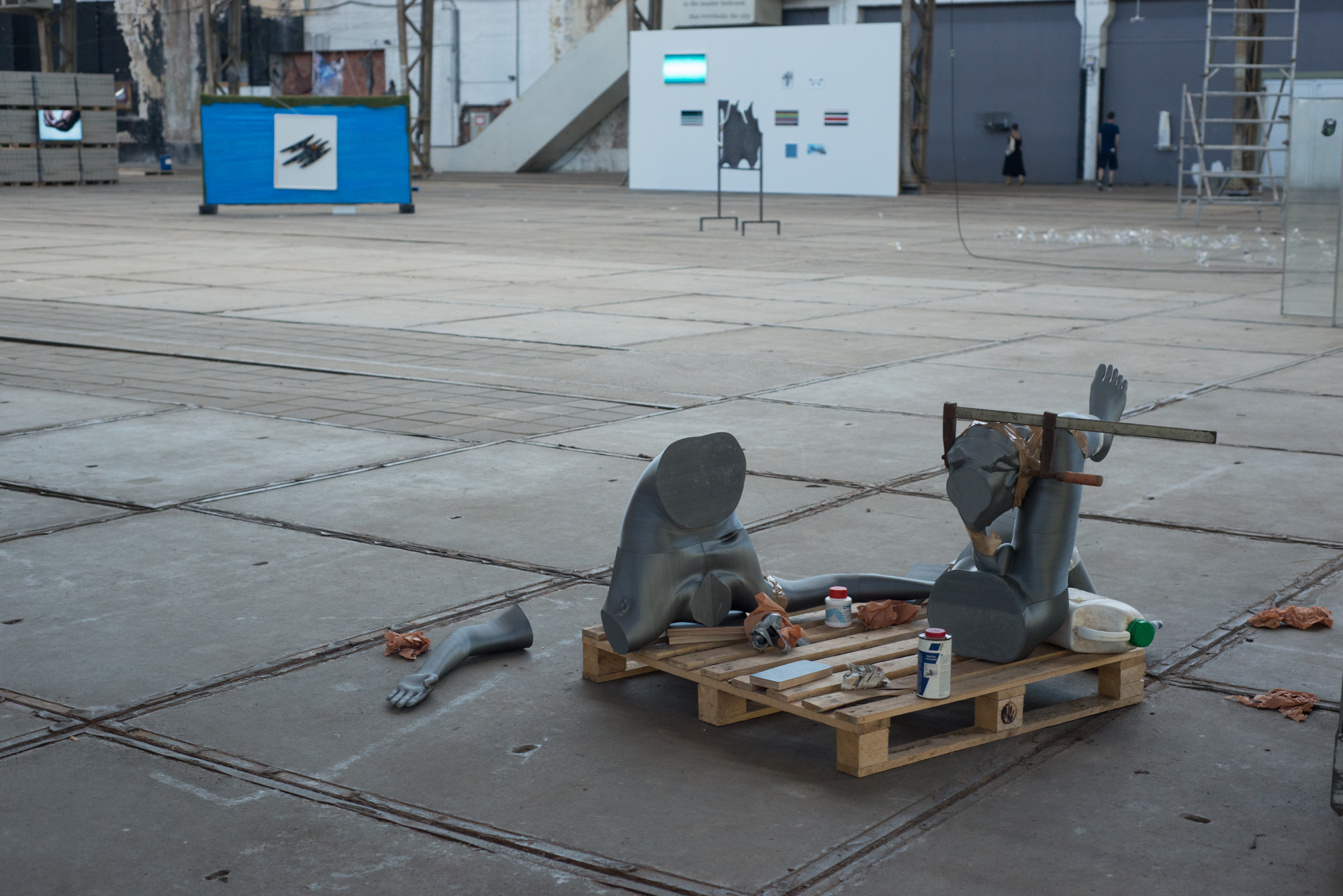 FLOR MAESEN works with aspects from different disciplines incorporated from photography, video, sculpture and 3D design. His digital-sculptural inquiry, The Harvest, revolves around an attempt to visualise what could be described as the human ego. It depicts a figurative sculpture of an adolescent performing the act of ‘auto-fellatio’, lost in an endless orgasmic cycle. For his MAP presentation at KASK in 2018, Maesen gave shape to this man through a video and sound installation. The installation was accompanied by a text by LIENE AERTS, originally featured in Dutch in ONRUST magazine. This text guides the reader through the body of the self-sucking man as viewed from above and outlines a broader historical context. In the framework of the last edition of the Biënnale van België the man finally appeared in a material form — first as pieces of a puzzle, later as a finished symbol.

VIEWED FROM ABOVE by FLOR MAESEN reflects the creation process of the recent sculptural work by the artist accompanied with the text by LIENE AERTS, originally featured in Dutch in ONRUST magazine, translated by SIS MATTHÉ. Photos were taken by FLOR MAESEN in the course of preparations for Biënnale van België, Ghent, 2019.