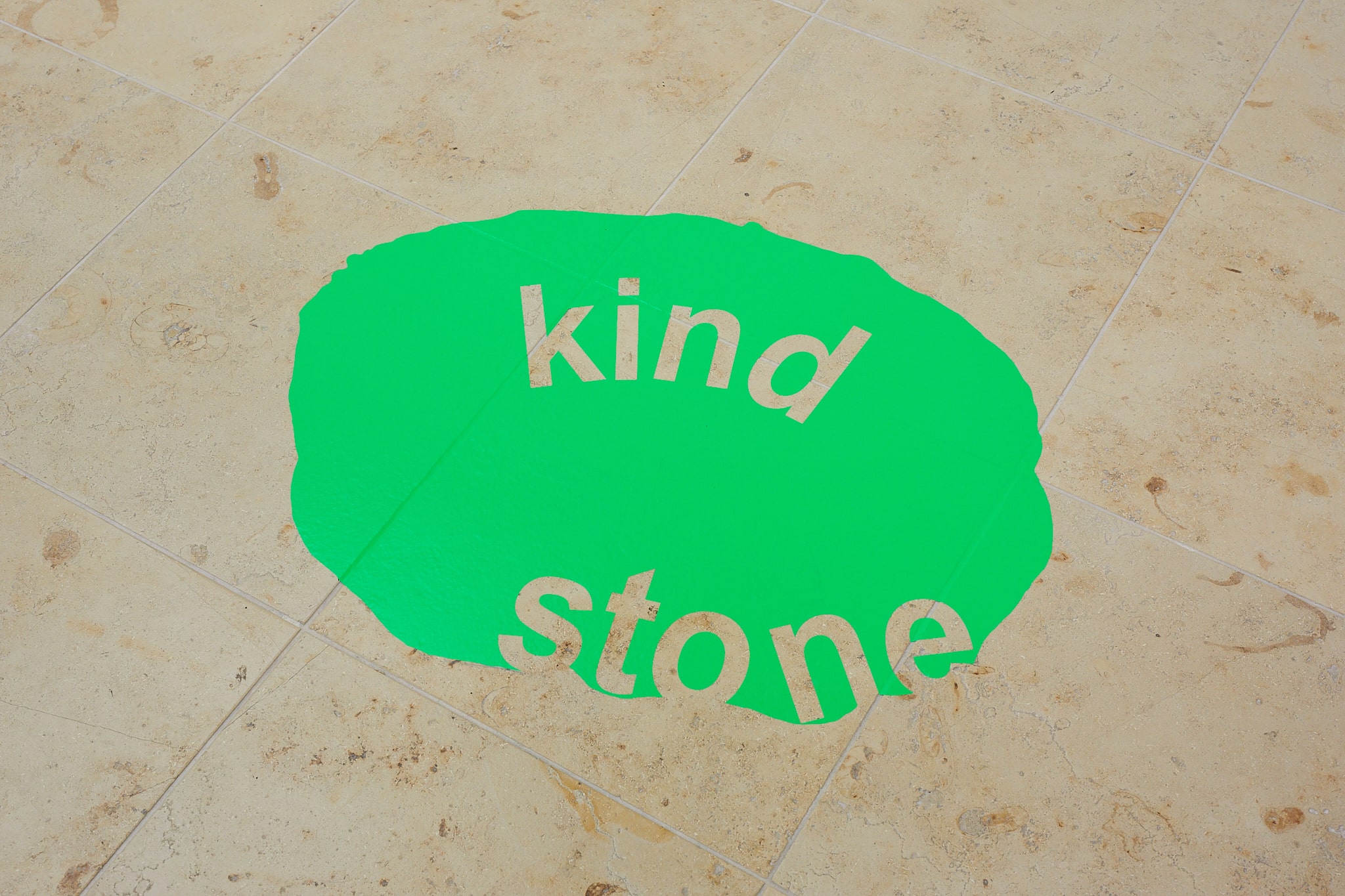 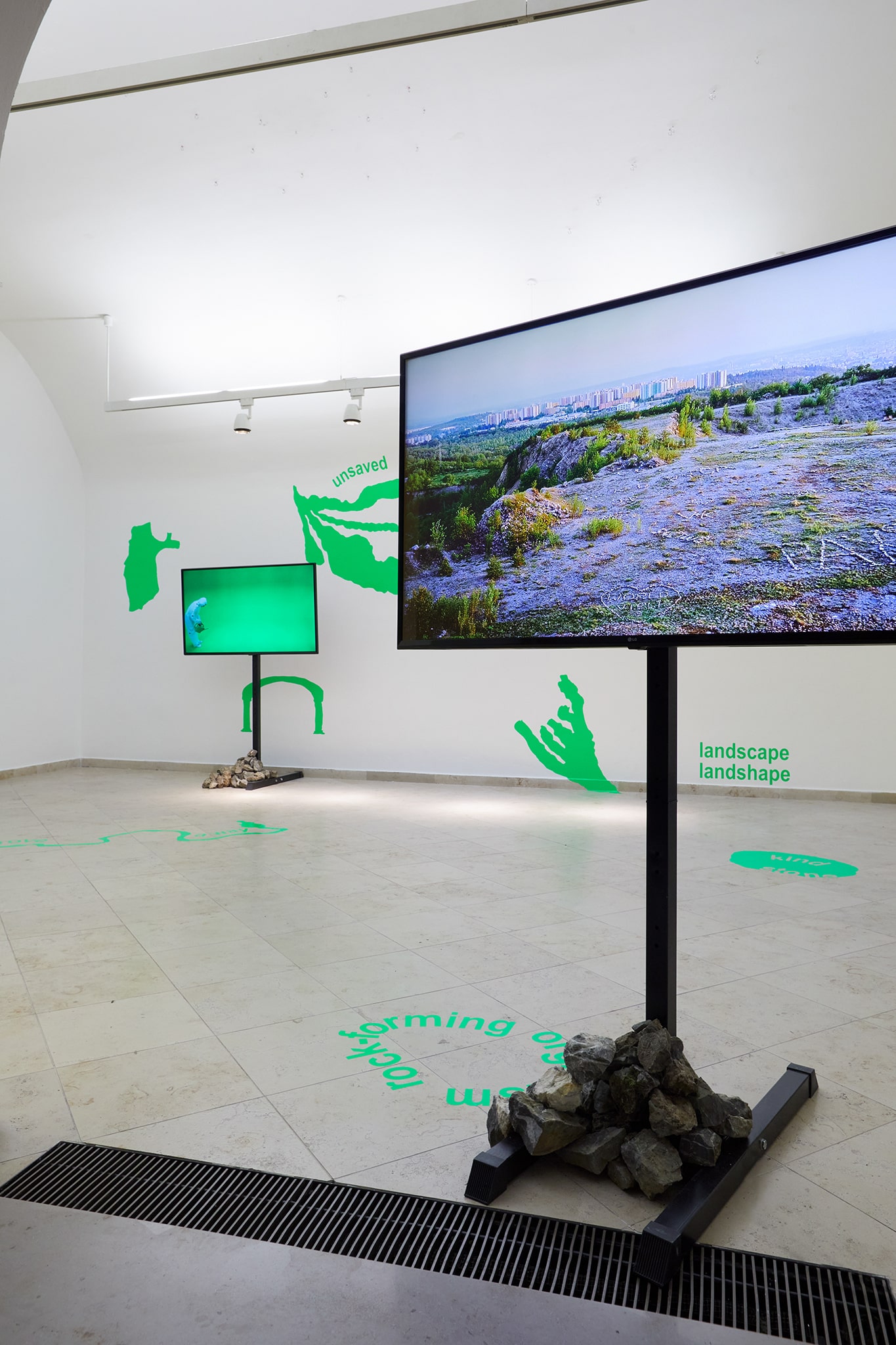 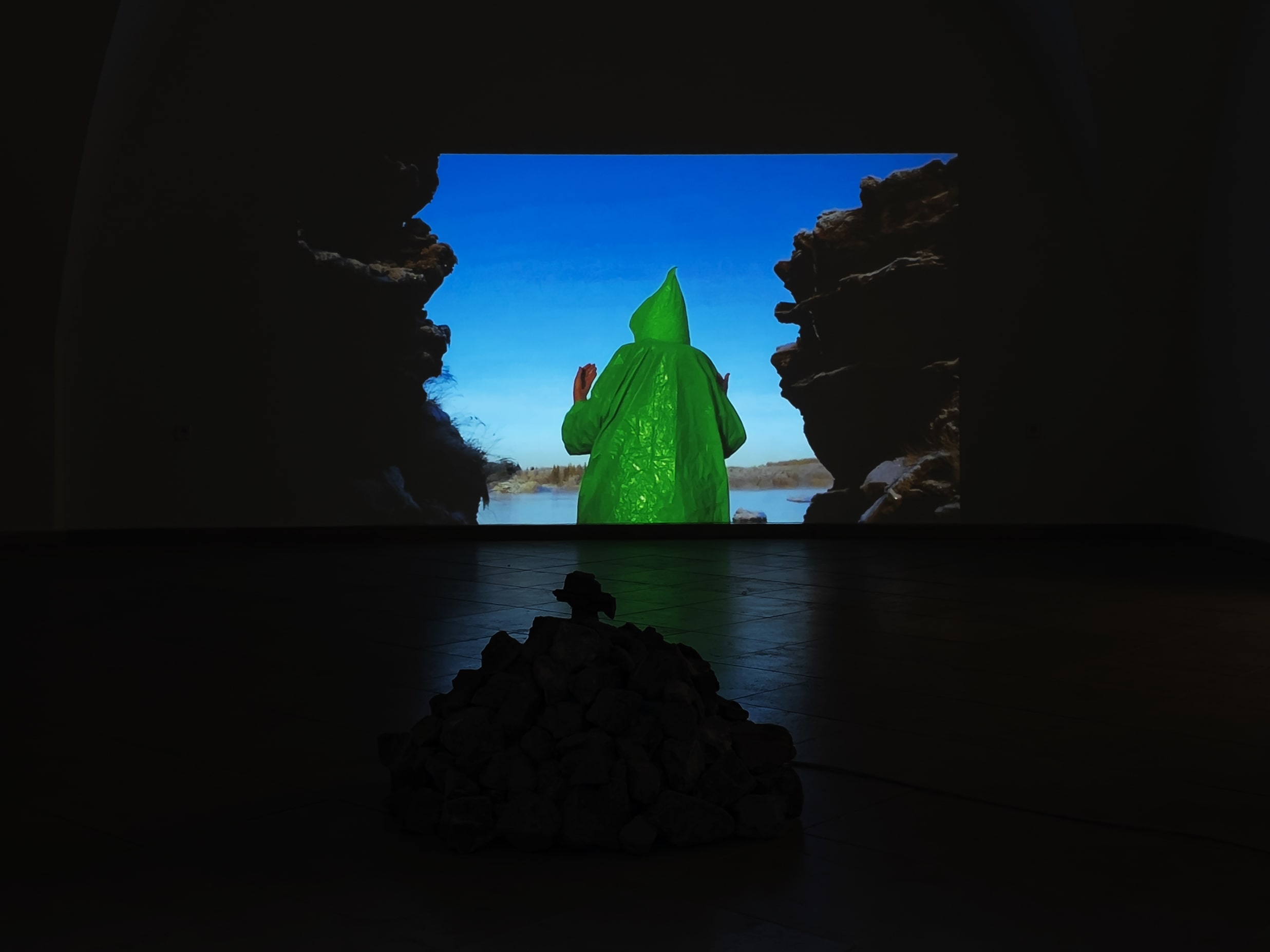 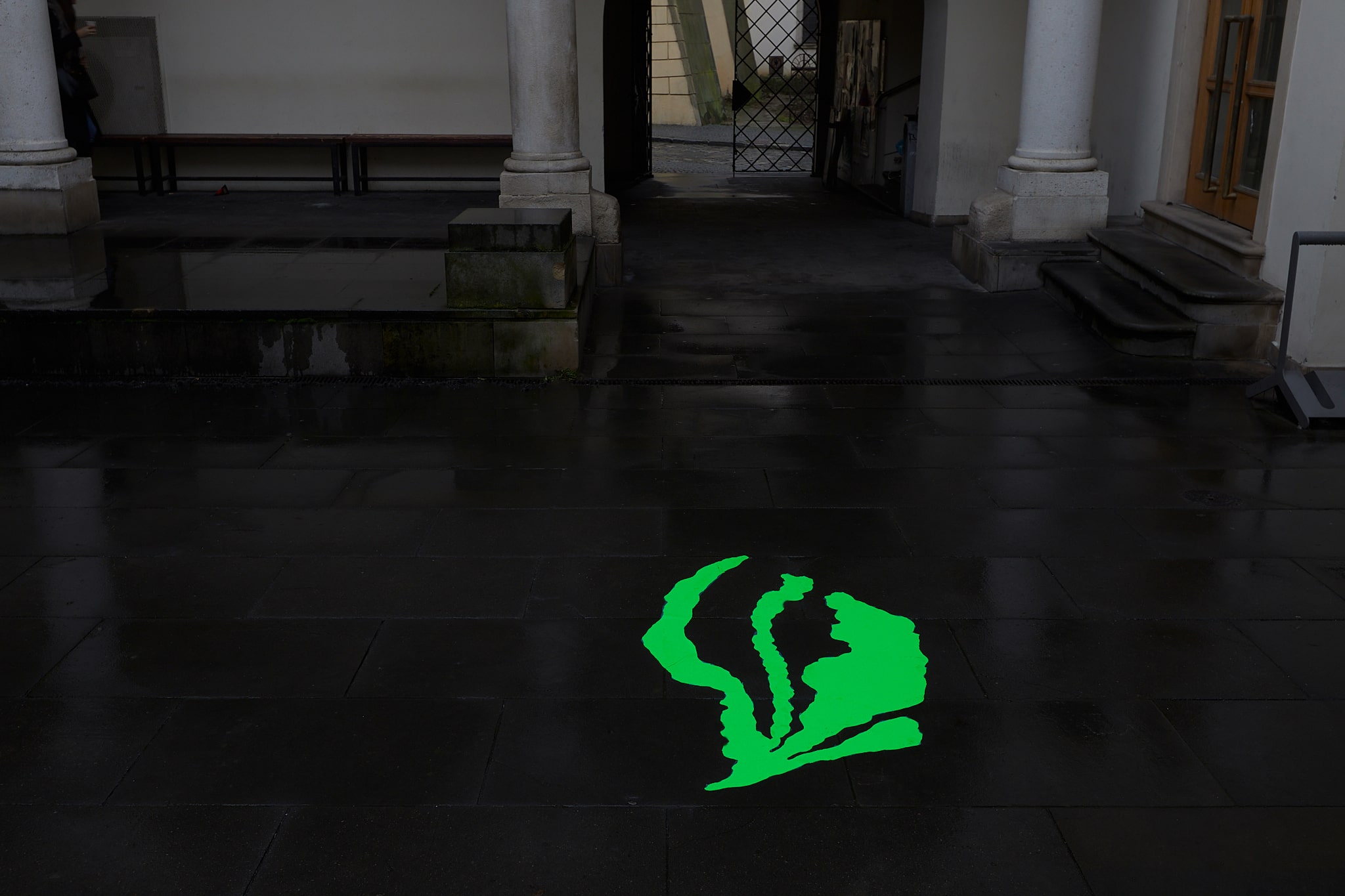 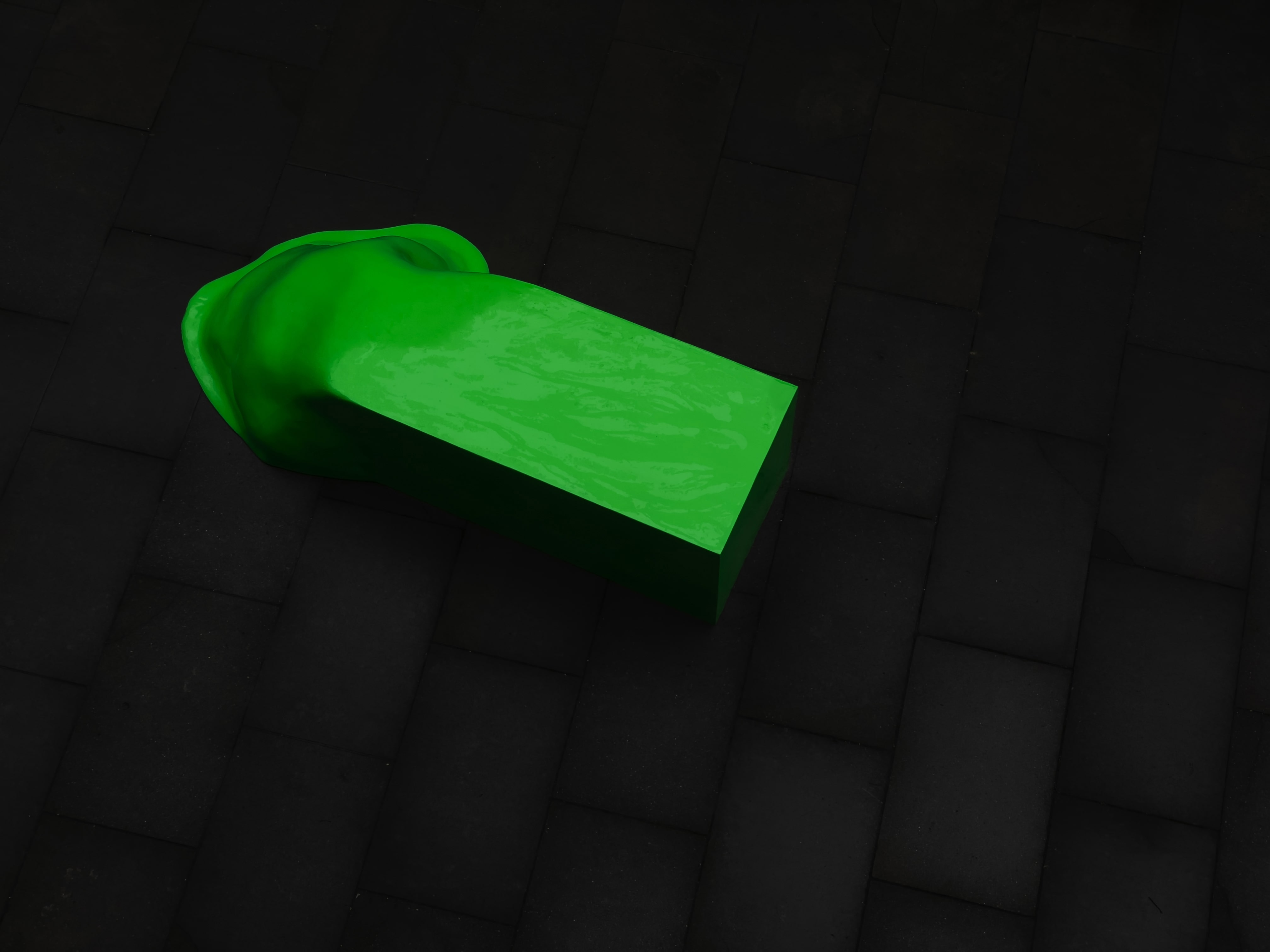 Zuza Banasińska, Fix it in post, 2020, installation views, The House of the Lords of Kunštát, Brno, Czechia. Courtesy of the artist.

Approximately a year and a half ago Zuza Banasińska spent several months on residence in the House of the Lords of Kunštát in Brno. She was fascinated by the visit to the former limestone quarry at Hády in north-east Brno. The terraces left on this ecologically important location by mining activities now serve as a somewhat post-apocalyptic setting for cryptic images, text messages and love letters assembled from rocks. They resemble archaeological sites of indigenous tribes whose images were probably ancient astronomical maps drawn in order to keep track of the movement of stars in the sky and to disclose a meaning in it. They represent a non-human system, the universe, seen through the human eye. In contrast, the stone compositions at Hády serve a completely different purpose, they do not record any natural phenomena. Their objective is not to create a map but to leave a testimony of an individual presence on the landscape surface. Apart from human eyes, these messages are read and written into maps by satellite lenses. The love messages are thus viewed by the eye of a machine circling the Earth. Zuza reflects on this fact in a recorded performance. Wearing a green coat, on the surface of one of the terraces she assembles a message from rocks. Directly addressing a satellite with the highest image resolution, she places its name, WorldView 3, in a heart. Another coded messages can be read in the sound layer of the exhibition. It is derived from a badly done machine translation created by an application which directly translates a scanned photo. Zuza took a photograph of a popular-science text from the information board at Hády. The stylistic and logical inaccuracies of the translation construct a metaphorical text, a kind of conceptual language full of urgent pleas and sometimes even mythological associations. Zuza thus assembles a picture from multiple temporalities; its reading depends on our ability to associate and the ability to create fictitious scripts based on these associations.

The same principle is needed in the reading of the symbol of the green colour of the screen which makes up an important motif of the installation. In the film industry, this technical element is an instrument of the post-production of tricks and special effects, and can be thus viewed as a space for fiction, a field of endless possibilities of alternative stories. The mining of limestone at Hády left a distinct mark on the landscape. The chopped land surface in a satellite photo is also a message, a record of human past presence. The installation elements in the green screen colour can function as a gesture of creating a free space for alternative care, for the healing of the exploited landscape, though only imaginary.

The phrase “Fix it in post” comes from film production, the word “post” is an abbreviation for post-production. It is used by filmmakers when a take is not successful; they want to avoid the time-consuming process of reshooting and turn to the editors to fix the error. In the context of the exhibition, the ecological level of the mined landscape on the border of a nature reserve and tools of a film set, the title represents a slightly ironic yet valid approach.

· From the press release: FIX IT IN POST by ZUZA BANASIŃSKA curated by IVANA HRONČEKOVÁ running until Jan 31, 2021, at the House of the Lords of Kunštát, G99 Gallery, Brno, Czechia