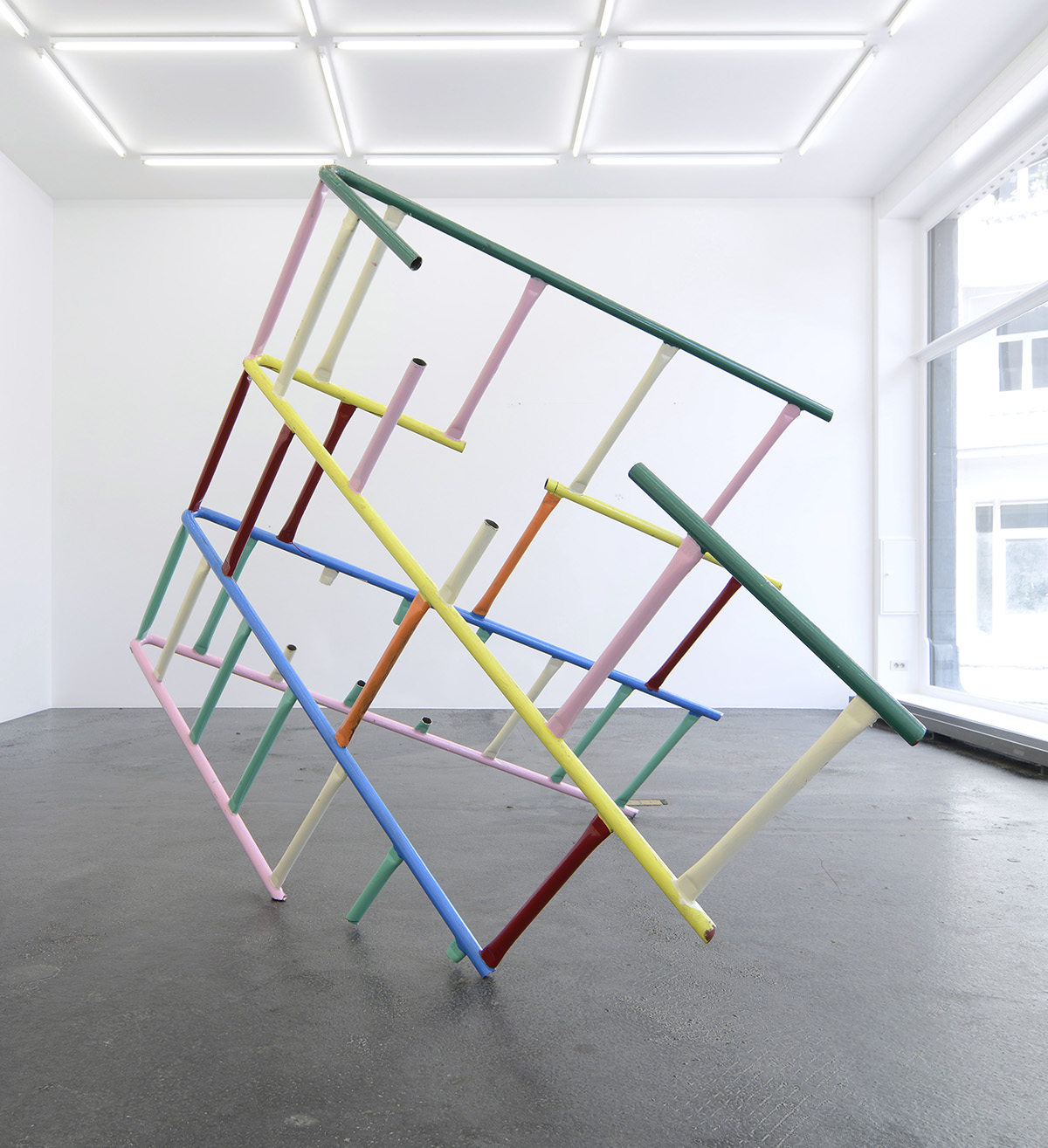 In your works, you seem to make links to the post-transformation aesthetics of Poland. The series such as 1989 — the year communism collapsed — or FADOM, a communist-era building company, metaphorically direct viewers to read them in the context of socialist realist aesthetics. Do you want your work to be perceived through these references?

I was born in Poland in 1985 and moved to Canada when I was two and a half years old. I didn't return to Poland until the year 2000, and then again in 2008 as an adult, for the first time. I had just finished my architectural studies in Winnipeg, and I was fascinated by the communist-era architecture which was in a state of flux. Prior to moving to Canada, my father was a professional cyclist, and then afterward worked in construction, building “bloki”, the prefabricated apartment buildings that dot Poland. In Canada, he worked in a metal fabrication factory for a number of years, which has also influenced my work. This all became an intersection of interests for me — education, biography, an innate attraction to certain aesthetics. I then moved to Berlin in 2010 and had the opportunity over the years to make trips throughout Poland, where I started documenting these architectural situations. 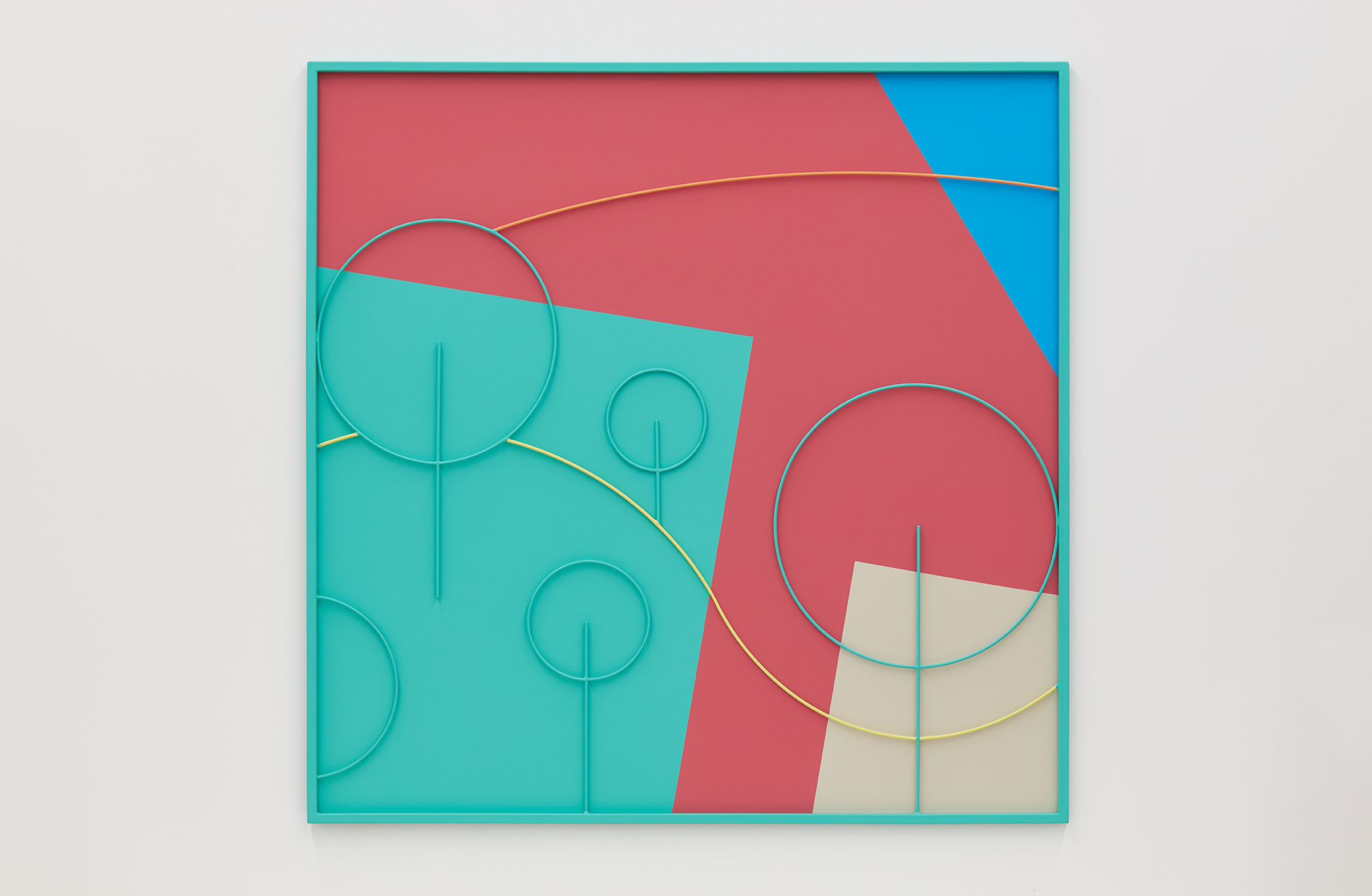 Przemek Pyszczek, Facade, 2018, Polyurethane paint on dibond and steel. Courtesy of the artist

What is noticeable is not only drawing from the communist aesthetics itself but also from the rough materiality of a building. Architectural fragmentation merges with painting on both borders of these mediums. Can you say something about it?

As someone who doesn't have a formal fine arts background, I have always been more interested in relatable, tactile materiality in my work. I prefer materials and finishes that have a human quality — what you see is what you get, and not having the viewer guessing what the process was or how the object was made. From my childhood until now, my dad has always made me help him with tasks around the house, so I have a familiarity with making and building, but I'm not a fine craftsperson by any means. I'm a jack of all trades, master of nothing, as they say. 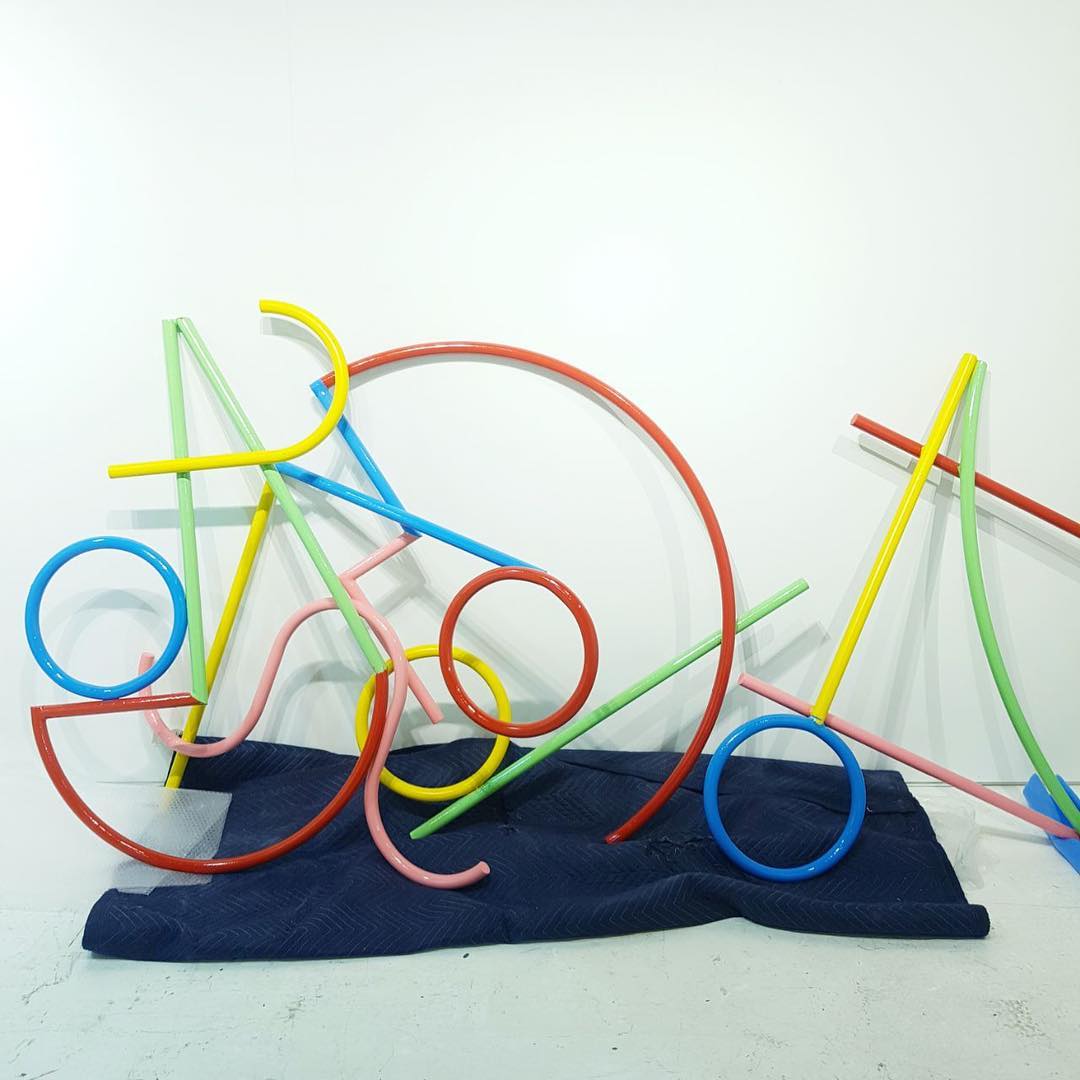 Playground Structure series shows experiences of social and cultural displacement as first-generation North Americans which you have been as immersed in that reality of an immigrant. How does it inform your practice?

My experience as an immigrant was one of feeling at home, but also feeling like the outsider. Having an unpronounceable name that children made fun of, having parents that were immediately identified as outsiders because of their accents, influenced my immigrant childhood. My parents would often reference things from Poland that I had no connection to, whereas children I was growing up with would make references that I didn't understand as well. I think that if I didn't have the name I have, maybe my experience would be different, as I wouldn't have to explain my origin story to every single person I met.

The Playground Structure series reflects this in the way that on one hand, the forms are very specific as they reference existing playground jungle gyms throughout Poland. On the other hand, this typology exists pretty much everywhere around the world. The objects are universal, but we also have our own experiences and memories of them. The idea of cultural alienation works on a spectrum — even people that move from one side of a country to the other can feel a sense of displacement or otherness. We're all one, but we're also so different. 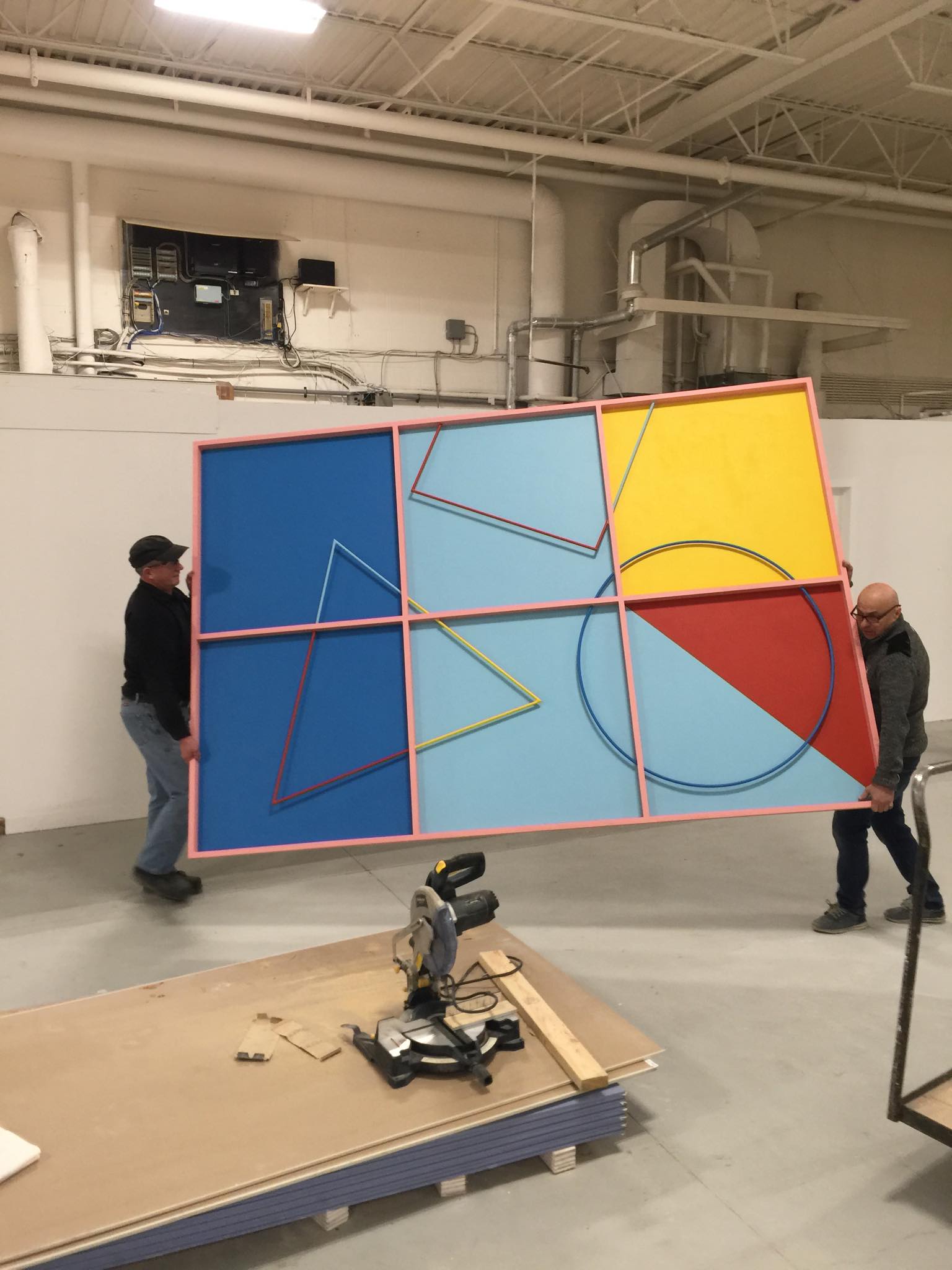 During the installation of Przemek Pyszczek’s Facade, polyurethane paint on dibond and steel. 2018. Courtesy of the artist

Last year you created a spatial installation Adam which reminiscences of children's playgrounds, which were placed between socialist apartment blocks. What would you say about reception or feedback to your work as seen by people who are not familiar with Eastern Bloc aesthetics?

What has been interesting in presenting my work in various contexts is that people will make connections to their past and experiences when they see the work. One person told me the Playground Structure series remind them of their childhood in India, whereas when I presented my work in New York at an art fair, the actor Jonah Hill came by the booth and said that the works reminded him of his childhood in Los Angeles in the 1980s. But the interesting thing is that even though these universal connections can be made, a Pole will encounter the work somewhere outside of Poland, look at it, and say that it's referring to communist-era Polish architecture. 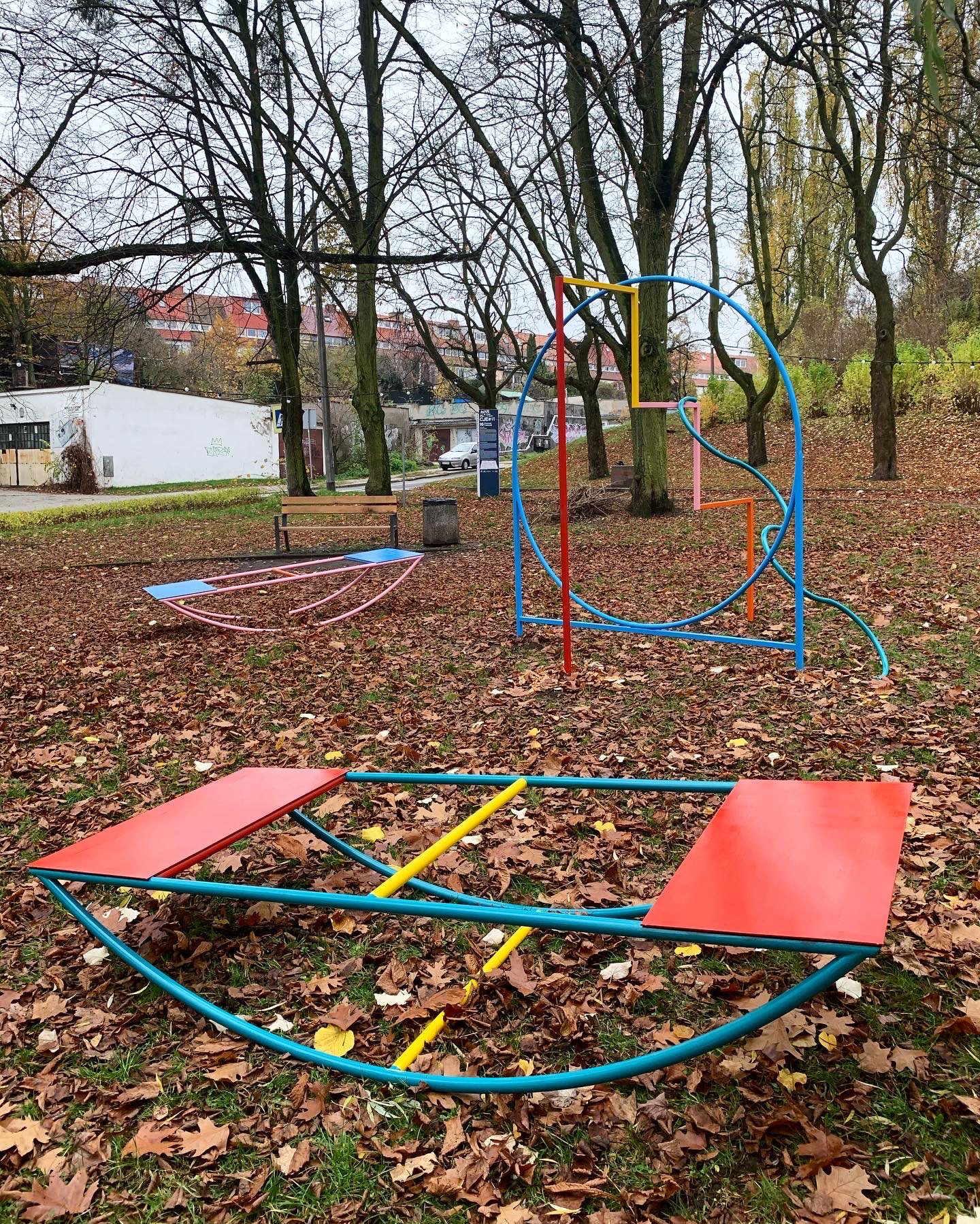 Lately, your work has been featured in 100 Sculptors of Tomorrow which covers the most promising emerging artists. How would you describe your current position as an artist and the sculptural materiality referenced to your works recently?

Two years ago, I left Berlin and moved to Drzeniów, a small village in southwestern Poland. The surrounding architectural landscape and its related visual elements have influenced my work. I have used found and reclaimed metal in my work, wood that comes from the surrounding forests, and OSB sheets that are produced in a nearby factory. I have also used high-density polyethylene sheeting, which is prevalent in the new local playgrounds, which are slowly replacing the old ones that my previous work has referenced. The local public folk arts and applied arts I've encountered have also been a source of inspiration and reference. 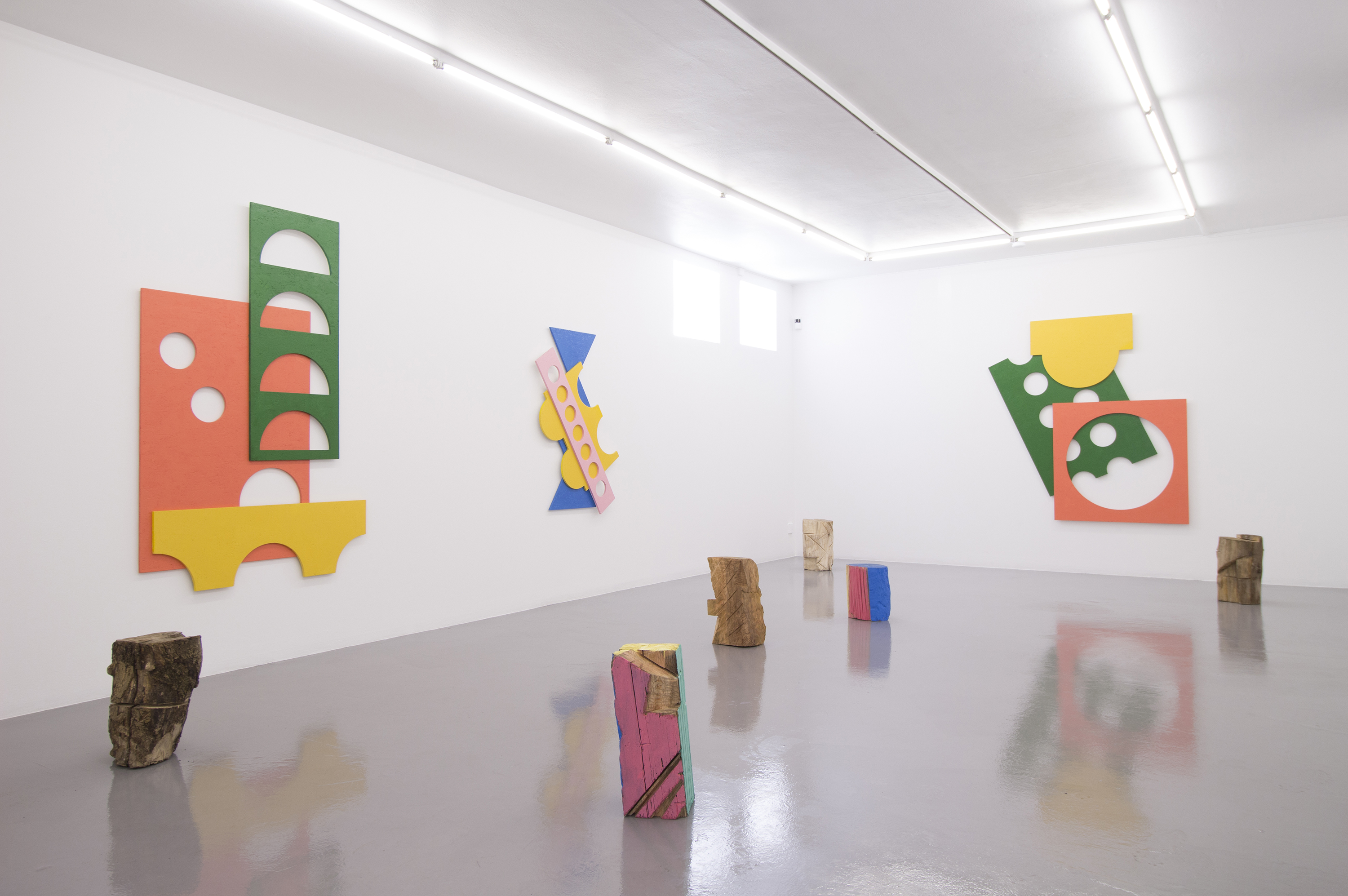 The context of your new home and studio in Drzeniów, as you mentioned, significantly influenced your work and perception. What were the reasons for this change?

I was looking for a change as I no longer saw the point of living in Berlin. The city was becoming more expensive, busier and more aggravating, and I didn’t feel inspired by being there anymore. I have lived in a city my entire life, so I wanted to try something new, and live in a rural context.

And how do you anticipate to develop your work?

In terms of my work, I think this change will affect the materiality and content of my work. I’m now living in a more remote place with a different social dynamic. The materials I have access to are also different, but I also have opportunities to more readily collaborate with local craftspeople. I also have outdoor space to work, so I would like to develop sculptural work that wasn’t the easiest to work on and store indoors. I’m excited to see where these changes will take me. 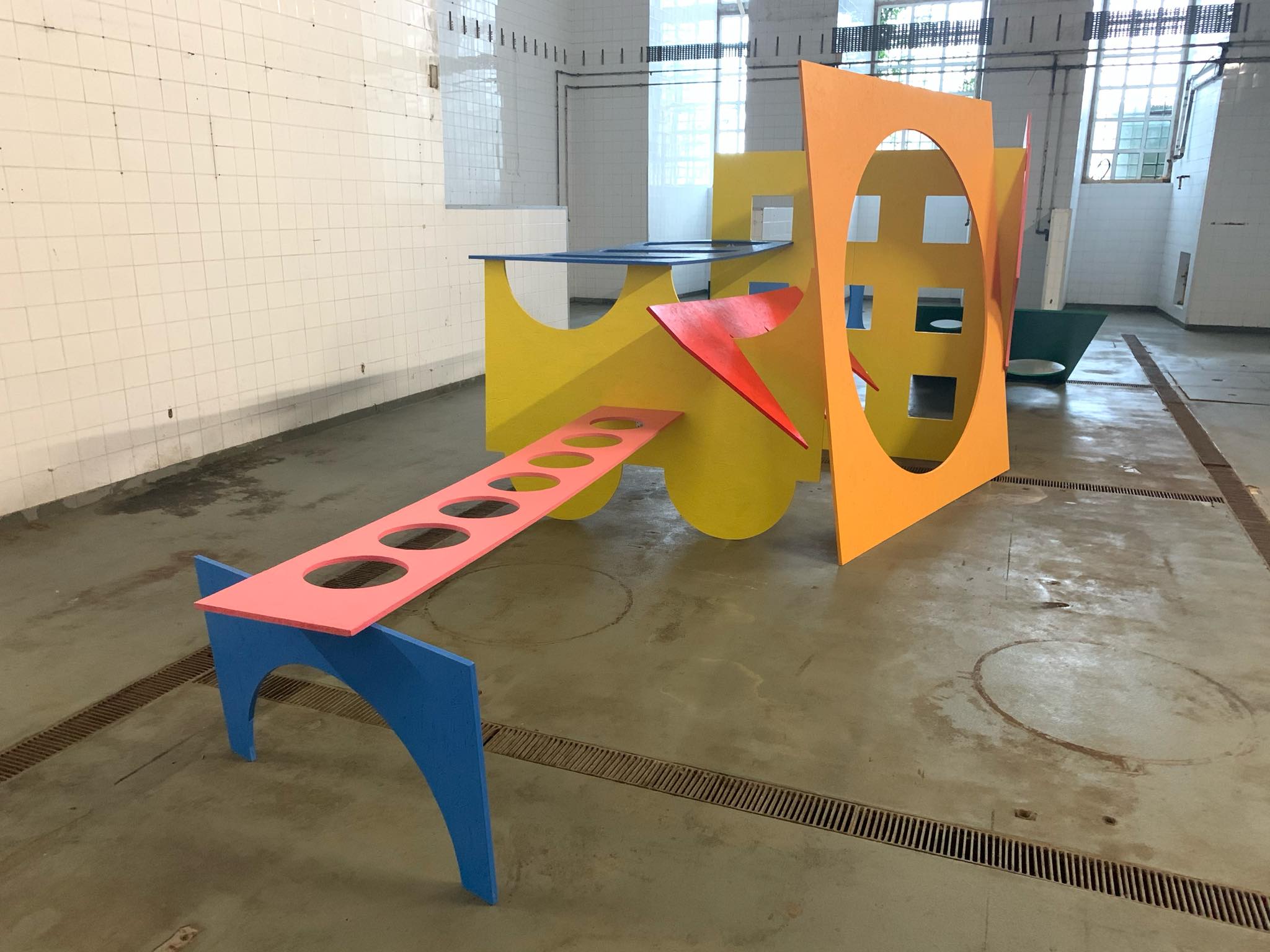 PRZEMEK PYSZCZEK (1985, PL) obtained his Bachelor of Environmental Design from the University of Manitoba, Winnipeg (2007). Through architecturally inspired sculptures, installations and paintings, PYSZCZEK’s work traces Poland’s transition since the fall of the Iron Curtain and also serves as an ongoing journey to rediscover his own past. In the recent years he studied and photographed the Soviet-era housing blocks and then transformed their decorated facades into paintings, featuring fragments of their colorful, graphic designs overlaid with the patterned metal grating typically found on balconies and over windows. His work was recently included in 100 Sculptors of Tomorrow by Thames & Hudson (2019) and furthermore presented within numerous solo such as FADOM at Leto in Warsaw (2019), Tatjana Pieters, Ghent (2018), Białystok at Plug In Institute of Contemporary Art, Winnipeg (2018) and Galerie Derouillon, Paris (2018) and group exhibitions including Narrations #11, Gdańsk (2019), Forever Never Comes – Metabolismo del Tempo at Museo Archeologico e d’Arte della Maremma and Area archeologica di Roselle, Grosseto (2017/18), Belenius, Stockholm (2016) Sandomir, Nicodim Gallery, Los Angeles (2016) Muscle Memory, Peres Projects, Berlin (2015); Building Systems, Berthold Pott, Cologne (2015) and Corporalitas, Open Forum, Berlin (2013).